50 Cent is doing a lot less rapping and a lot more writing these days: He’s writing a book about bullying. 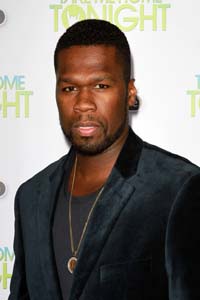 50 Cent knows a thing or two about bullies — remember when he was shot nine times? Yeah, that’s why the In Da Club rapper is penning a book on bullying. The book — tentatively titled Playground — will detail a bully’s road to redemption.

The book will be written in semi-autobiographical form and will be released in January of 2012, according to MTV.

“I had a strong desire to write Playground because I wanted to explore how a kid becomes a bully,” 50 Cent said in a statement. “I drew on events from my own childhood and adolescence, but was excited to see the story take on its own life. This book would have been very helpful for me growing up and now that I have a teenage son, it is my goal that this will have a positive influence on all teenagers.”

We think writing a book against bullying is great and all, but does that mean he’ll stop his Twitter feuds with other rappers? We’re already upset that we won’t get to see him sparring with Ja Rule for at least another two years. Don’t go soft on us, Fiddy!

Do you think kids will relate to a book on bullying by 50 Cent?