Friends of Jackass star Ryan Dunn weigh in on his tragic death.

More details are starting to emerge about the sad death of Jackass star Ryan Dunn. A photo of Dunn’s burned-out Porsche was posted on the web as it was lifted from the accident scene and it looks nothing like the sports car. In fact, it looks more like a few pieces of twisted up metal. 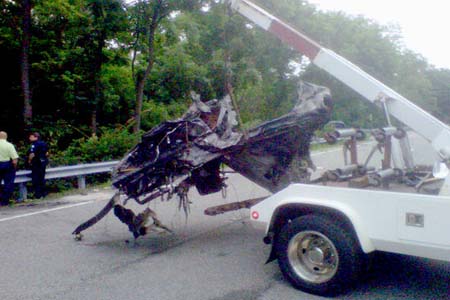 Celebrity friends of Dunn are starting to post their thoughts and condolences on Twitter. The most upsetting messages are from the stuntman’s friends and Jackass cohorts Johnny Knoxville and Jason ‘Weeman’ Acuna.

“Today I lost my brother Ryan Dunn. My heart goes out to his family and his beloved Angie. RIP Ryan, I love you buddy,” Knoxville wrote on Twitter.

“RYAN DUNN — a super awesome memory was at the J RODY walston & the business show!!! I MISS YOU BUD!! You were always a happy kick-ass dude!!” Acuna tweeted.

“RIP ryan dunn. You were an amazing guy and you were cut way to short. Enjoyed the times we had. My heart goes out to his family and friends,” Pink’s husband, motocross racer Carey Hart, tweeted.

“Ryan Dunn has passed away, he was a very nice and energetic guy, I met him a couple of times. Very shocked,” the director tweeted.

“So sad to hear about Ryan Dunn… and in is honor I say this: I am mad AND disappointed… # RyanDunn,” Hanks tweeted.

Bam Margera’s mother is the person that confirmed Dunn’s death to the media.

“I have not been able to talk with Bam as he is in Arizona but I cannot believe that his friend is dead — I felt like I lost one of my own sons when I heard that Ryan Dunn had died,” Margera said. “Ryan was a wonderful person, he really was the sweetest and nicest guy — he was like my extra son, everybody loved him. He had a long-term girlfriend and she will be absolutely devastated — she has turned off her phone just now. It’s just so sad, we cannot believe Ryan has gone — I’m too upset to say anything else just now.”

The Margeras later said they talked to their son and that he’s completely “devastated” and they’re worried about him.

What are you feeling about Ryan Dunn’s sad death?