Green Mile actor Doug Hutchison has taken a bride, and she’s 16. So, are they going to prom? 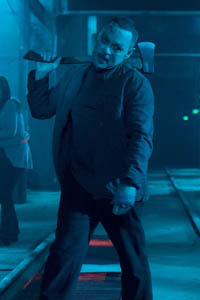 Actor Doug Hutchison, 51, has married 16-year-old Courtney Alexis Stodden, an aspiring country singer. That’s right, the Green Mile, X-Files and Lost actor has married a young, beautiful blonde who is 35 years younger than he is. As they say, only in Hollywood.

“We’re aware that our vast age difference is extremely controversial,” the couple admits. “But we’re very much in love and want to get the message out there that true love can be ageless.” In their wedding photo, the 50-something actor can be seen clutching his teen bride, who is wearing a sexy strapless white wedding gown.

Hutchison’s most high-profile role was as bad boy prison guard Percy Wetmore in The Green Mile starring Tom Hanks. On Lost, he played Horace Goodspeed, and on The X-Files, he played Eugene Tooms. He’s also appeared in Con Air, Batman & Robin and I Am Sam, as well as 24, CSI: Miami and Law & Order: Special Victims Unit.

The new bride is a beauty pageant star and aspiring country singer. At 12, she became a model, and at 15, she competed in the Miss Washington USA pageant.

The couple was married in Las Vegas on May 20, where state law requires a parent must give consent for a minor to obtain a marriage license.

Is 16 too young to get married?