It’s a Playboy battle of the exes as Holly Madison and Crystal Harris duke it out on Twitter over the wedding that never was! 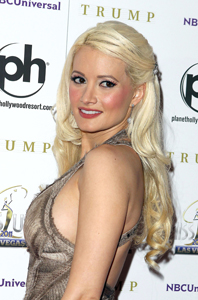 Harris, who jilted Hef just days before their wedding planned for last Saturday, instead spent the weekend partying with pals in Vegas — and Hef’s ex-longtime-girlfriend Holly Madison thinks that just plain sucks.

“That’s disgusting and whoever booked her is tacky!”

“Trust me, NO ONE is interested in booking Crystal! She left Lifetime high and dry while filming a 2 hour special!”

Crystal and Hef’s wedding was to be the subject of a TV special.

Later Madison retweeted something Crystal wrote: “Hard times show your real friends…” to which she responded, “No, they show HEF’s real friends.”

For his part, Hugh Hefner seems to have figured out that the best way to get over someone is to get under someone else. The octogenarian is already cozying up to a new woman: Miss January 2011 Anna Sophia Berglund.