Though they haven’t announced the date, it looks like Nick Lachey and Vanessa Minnillo’s wedding is right around the corner. SheKnows has the scoop on the bachelorette party!

Per usual celeb behavior, The Sing Off’s Nick Lachey and his gorgeous bride-to-be Vanessa Minnillo are keeping their wedding date under wraps. But if Minnillo’s mini vacay this weekend is any clue to the timing of their upcoming ceremony, we’d say these two will be wed by summer’s end! 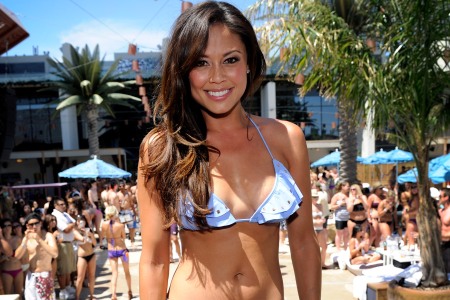 Minnillo was spotted Saturday celebrating her bachelorette party in Las Vegas at Marquee Dayclub at The Cosmopolitan.

The beautiful brunette showed off her amazing beach body while lounging in a cabana on the pool’s roof deck surrounded by all her friends.

“The future Mrs. Lachey was treated to a cake topped with a sugar ring from Gimme Some Sugar as she danced around with her friends and posed for photos,” an eyewitness told SheKnows. 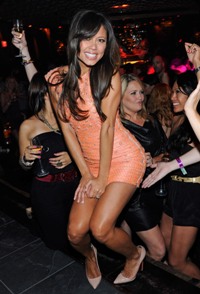 The night before, Minnillo and her entourage kicked off the festivities at Lavo nightclub in the Venetian hotel, where she received a surprise performance from an unusually familiar face.

“She was serenaded by a midget impersonating her fiancé Nick Lachey,” said the eyewitness. “The pint-sized performer sang a song from Lachey’s former band 98 Degrees while removing his shirt. She was a good sport and donned the traditional bachelorette sash and crown while celebrating.”

Uh oh Nick, looks like you’ve got some competition!

FOR MORE ON NICK AND VANESSA’S WEDDING