Justin Timberlake and Cameron Diaz. In the same room. Together. And they are hilarious. That’s not a surprise honestly given the pair’s history together and evidenced by their comic chemistry onscreen in Bad Teacher.

Justin Timberlake and Cameron Diaz are, you guessed it, teachers in the new comedy Bad Teacher. We’ll let you guess which one is bad. Yes, Diaz’s character is even worse throughout the movie than in the film’s trailer. 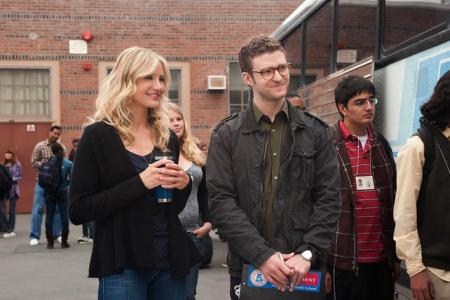 So for the sake of their art, the former couple came together and created a cinematic laugh fest. The duo sat down recently to dish [Expletive] in a Box, being funny on film and why the two of them, frankly, get along so well.

SheKnows: What teachers did you have that resonated with you, good or bad teachers?

Justin Timberlake: I had a teacher in seventh grade who told me I should have more realistic goals than songwriting and entertaining. My schoolwork suffered. You can quote me on this directly to her, “Suck it.”

Cameron Diaz: I had a teacher Mr. Fujikowa in sixth grade who used to come in after the weekend and tell us about his three-year-old son. He would say how wonderful it was to teach your son, to pass on knowledge, and you want to encourage them and teach them life lessons. And he sat with his feet kicked up on the desk talking about how his son was starting to walk, how gratifying it was to see him take the four steps up the stairs to the porch to get to the front door. As he got to the very top last step, he would pull on the string that he tied around his son’s leg to bring him back down to the first step [laughs]. I just thought that was the most amazing thing. I laughed so hard. Everyone else was horrified. I was like, “That’s awesome!” That to me… really shaped me [laughs].

SheKnows: Are you all products of the public school system?

Cameron Diaz: I am as public as education gets [laughs].

Justin Timberlake: We have to figure out a way to pay teachers more, that’s my opinion of it. They are surrogate parents away from home. Teachers, we actually learned more from them, who taught us life lessons more than trigonometry. They have such a huge responsibility and are underappreciated and underpaid.

SheKnows: Cameron, your character in the film is pretty ruthless in her effort to have breast implants. Was that hard to wrap your head around? 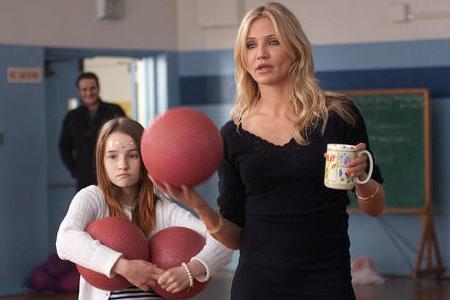 Cameron Diaz: Obviously if I thought I could get somewhere by having bigger boobies, I would have done it by now [laughs]. For her, it’s everything. It’s called hard economic times. Have you ever heard of it? You can’t find a millionaire like you could three or four years ago before the crash. It’s a lot of work for her now. It’s an investment. Suze Orman would have been like, “Girl, that’s part of your five-year plan.” She’s working hard for those. She thinks to get what you want, you have to invest in your business and hers is bigger tits.

SheKnows: You do what you gotta do to get a sugar daddy.

Cameron Diaz: I’m not judging her. But the thing about it is if we really believed this was the right thing to do, we wouldn’t be making fun of it, right?

Cameron Diaz: It was really fun to make fun of her. She focuses on the wrong things. It was great to go to work every day with a team who was on the same wagon going towards complete and utter distaste and throwing everything out the window. We had a lot of fun doing that.

SheKnows: The dry humping scene was hysterical! Was it difficult or weird to film?

Justin Timberlake: I got to say, there’s nothing wrong with a good jean jam [laughs]. We felt, Cameron and I, that we had a responsibility to young people who are going to buy tickets to Transformers and then sneak into this movie because they’re underage. It really is a public service announcement for safe sex. No one ever got pregnant with their jeans on.

Cameron Diaz: [Laughs] It was absurd. That’s pretty much the only message in the movie that we are proud of [laughs]. Other than that, there’s nothing else [laughs]. We thought we shouldn’t just be making a movie about nothing that is of any importance, if we are trying to be role models in any way, we should at least offer up a jean jam.

Justin Timberlake: It was jamming [laughs].

SheKnows: You were in The Sweetest Thing a number of years ago…

Cameron Diaz: Ten years ago — can you believe it?

SheKnows: And of course Something About Mary. With Bridesmaids doing really well, can you talk about how it’s the time for women behaving badly in comedy movies currently? 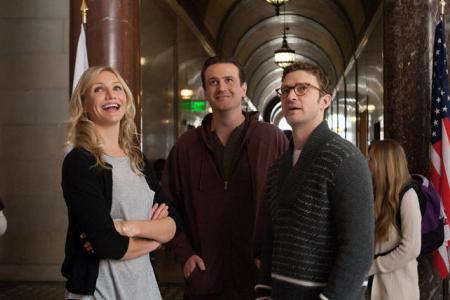 Cameron Diaz: My commitment to it is pretty obvious [laughs]. Women have always behaved badly, probably worse than men. At this moment, it’s time for women to come out and be themselves and accepted. There are a lot of those films now — audiences are willing to laugh at those things. We’re tired of seeing the same things.

Justin Timberlake: As a male who enjoys those dirty things that women say, I think funny women have been around forever — Carol Burnett, Madeline Kahn — there have always been genius female actors in comedy. I also think we live in an age where technology has afforded a generation a lot more of a crass look at the world. I think the level of what we can understand about brash humor has been raised.

SheKnows: How did you guys craft the chemistry?

Cameron Diaz: [Laughs] It’s like comedy marksmen. Everyone is precious. They pull back the arrow, they took a breath to slow down the heartbeat, and then they let go. Bull’s eye! You have to do that on a comedy like this, you are constantly shooting, and you never stop.

SheKnows: Justin, you’re in line to join the five-time hosting club of Saturday Night Live. What makes a host a good fit for that show? Do you ever meet with the other five-timers like Tom Hanks or Alec Baldwin?

Justin Timberlake: Yeah, the season finale was just my fourth time, although it does seem like more because when I’m in New York City, they can’t keep me out of 30 Rock [laughs]. I grew up with SNL. It is an institution. It is part of the humor and chemistry between me and my father. I come from a divorced family. I didn’t get to spend a lot of time with my father when I was young and it was something that we share that is really special to me. To be honest, I’m here because of SNL. Getting the shot to be in Bad Teacher with these genius comedians and comediennes, it goes directly back to SNL and Lorne Michaels for letting me be there and letting me rock out with…

Cameron Diaz: A [Expletive] in a Box?

Justin Timberlake: Can we just say, that is a thoughtful Christmas gift?

Cameron Diaz: It is! The smaller the bow, the bigger the package.

Cameron Diaz: That was the great thing about this movie. It was genius. There’s no apologizing, that’s the beauty of this script. It is such a breath of fresh air. You usually spend the last 20 minutes of the movie apologizing for what the character did in the first hour and a half. People are just afraid of just owning it. In life, we don’t just have an epiphany and change our life. It happens. But, it’s not the norm.