Amy Adams has starred with some heavyweights. Just last year she appeared in The Fighter which won two acting Academy Awards. But, nothing is as enormous in the pop culture lexicon to Adams as the opportunity she has to star opposite the always animated and lovable creatures of The Muppets.

SheKnows was on the Los Angeles set of The Muppets and spoke to Amy Adams about her passion for The Muppets as well as sharing time with the always brilliant Jason Segel. Amy’s baby, Aviana Olea Legallo, was with her on the day we visited The Muppets set and the mom’s glorious glow was brilliant, after visiting with her daughter and shooting a few scenes with Segel and a few Muppets you might recall, including Kermit, Miss Piggy and a number of others that star in the film which arrives November 23. 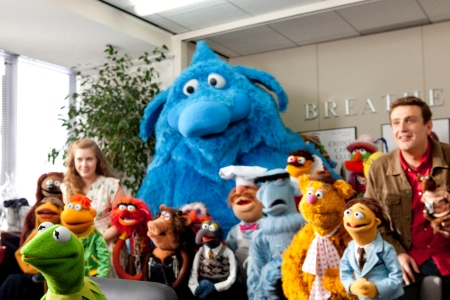 A Muppet day with Amy Adams

SheKnows: Was the fact that The Muppets was shot in Los Angeles part of the reason you made The Muppets your next film?

Amy Adams: It’s a huge benefit for me having just had a baby. I can be at home and be working with The Muppets, which is such a family friendly set and family friendly film. She is here today. I’m sure you’ve seen me flying around with her. That is a huge plus. Also, just to get to introduce her to the Muppets is very fun. She was interacting with Walter today. It was the first time she had ever interacted with any of the Muppets. So that was cool.

SheKnows: Did you get into the Muppets as a kid?

Amy Adams: I watched The Muppet Movie obsessively. I can still pretty much say a lot of the lines and do a pretty mean Fozzie Bear. It’s actually the worst thing. They have me do it on the set all of the time and I am so bad at it. I realize they are laughing at me, but I still enjoy it.

SheKnows: Is it a badge of honor for you personally to appear alongside the Muppets in a film?

Amy Adams: It is awesome. I have been lucky to be a part of a lot of family films that have a great lineage with Enchanted, Night at the Museum and now to be a part of this. This is something I grew up with and was in love with. When I heard they were doing a new one I was really excited. Jason sent me a DVD where he and Kermit were inviting me to be part of The Muppets. It was really cool. Once Kermit asks you to do something it is really hard to look at him and say, “No.” So I was hooked.

SheKnows: Being that many of your friends grew up on the Muppets, do you have a lot of requests from them to come visit now?

Amy Adams: [Laughs] Yes. I have a lot of friends [visit] — not just for The Muppets, but for Jason. I have a lot of girls who really like Jason. There have been a lot of visitors. I have visitors today. It’s exciting because a lot of people grew up loving the Muppets and it’s nice for them to get to see it. 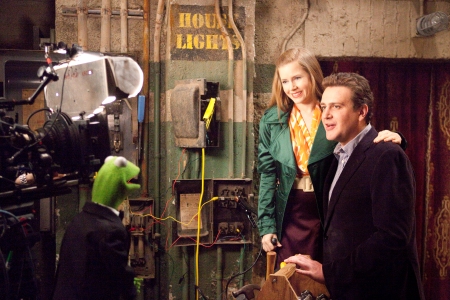 SheKnows: With this being a Jason Segel film, there had to be a lot of improvisation. Was that a nice challenge for you?

Amy Adams: I’ve been lucky enough to work with a lot of people who are great at improv. Jason is wonderful at it. All of the puppeteers are amazing at improv. I am comfortable with it, but I usually don’t do a ton of it. I don’t know if it’s the way it is written, or if my character is more submissive, or if it’s just my fear of keeping up with the improv artists.

SheKnows: We watched you and Jason film that scene just now in the car. Was that a little uncomfortable with all of you, the Muppets and the puppeteers, all jammed in there on a hot day?

Amy Adams: There have been more comfortable situations, but everybody is really nice [laughs]. So that is good.

SheKnows: Which Muppet are you closest with, the friendliest with?

Amy Adams: Walter, just because I’m in most of the scenes with Walter. Then it is probably Fozzie because he was my favorite as a kid. So I am always interacting with Fozzie when I get a chance.

SheKnows: Which Muppet cracks you up?

Amy Adams: The Muppets are pretty funny. They make me laugh. It is different ones at different times. It just depends on what the scene is — 1980s Robot, who you guys will meet, makes me laugh. He is the one driving the car. He is very funny.

SheKnows: Jason told us about your wide-eyed innocence and how you turn that on in your eyes. Is that something you are conscious about?

SheKnows: Have to ask about Enchanted, one of our favorite films. Are you surprised that there hasn’t been a sequel? 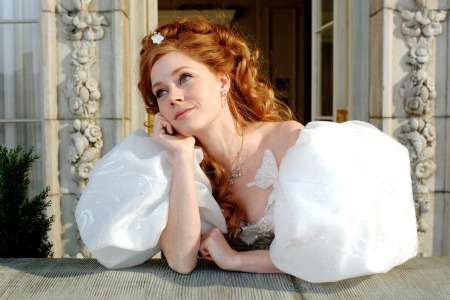 Amy Adams: I don’t know. I haven’t thought a lot about it because I loved the first film so much. So I always just accept it that if that is the only one, then I feel like it is a really great story. It has a beginning, middle and end. I’m really comfortable with that. If they have a script then I am here. I haven’t seen anything, though. I don’t know if I am surprised by that. I really loved the first one and I think it stands alone.

SheKnows: Since you did Enchanted and now The Muppets for Disney, do you and your baby get to go to Disneyland free for life?

Amy Adams: From your mouth to God’s ear. That would be awesome. I would love it — especially with my baby. We would have a good time. I love Disneyland. I have gone there a couple of times since Enchanted and it is a little strange. It’s not strange for me, but I think it is probably strange for the kids. We were in Fantasyland and all of a sudden you could see little girls start to get confused. They were like, “But I just saw Giselle in the big princess dress… but that is Giselle.” My fiance was like, “We’ve got to get out of here, Amy. We’ve got to get out of here.” I said, “They are little girls. They are going to be fine. They are totally safe. They are just little girls [laughs].”

Check out our interview with Jason Segel on The Muppets set!>>