Actor and ’90s rapper Tone Loc was arrested this weekend for domestic violence. 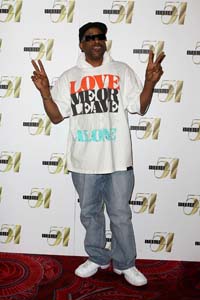 It sounds like rapper Tone Loc is more cold than funky these days. The rapper — best known for his ’90s rap hit Funky Cold Medina — was arrested Saturday afternoon in Burbank, California, and charged with felony domestic assault.

Tone Loc, real name Anthony Terrell Smith, was arrested at an apartment complex after an incident with the mother of his child. Not really a good way to start out Father’s Day, huh?

The rapper was also arrested for DUI earlier this year, but he claims that the incident was caused by a seizure.

Tone Loc was booked into jail and later posted $50,000 bail, according to TMZ.

We liked his music as tots, but we best remember Tone Loc alongside Jim Carrey in 1994’s Ace Ventura. He’s apparently worked more as a voice actor in recent years, lending his voice to shows like King of the Hill and the Chowder television series. His latest project is in post-production right now, according to the Internet Movie Database — he’ll voice the character Jerry in White T.