Famed saxophonist and longtime member of Bruce Springsteen and the E Street Band Clarence Clemons died Saturday from complications of a stroke. He was 69 years old. 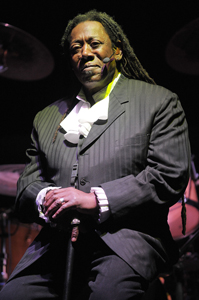 Clarence Clemons suffered a stroke a week ago, and now sadly the renowned saxophonist has lost his health battle. Clemons has died at 69 years old.

Although Bruce Springsteen issued a statement saying Clemons appeared to be improving, the saxophonist took a turn for the worse on Saturday.

“It is with overwhelming sadness that we inform our friends and fans that at 7:00 tonight, Saturday, June 18, our beloved friend and bandmate, Clarence Clemons passed away. The cause was complications from his stroke of last Sunday, June 12th.

Bruce Springsteen said of Clarence: Clarence lived a wonderful life. He carried within him a love of people that made them love him. He created a wondrous and extended family. He loved the saxophone, loved our fans and gave everything he had every night he stepped on stage. His loss is immeasurable and we are honored and thankful to have known him and had the opportunity to stand beside him for nearly forty years. He was my great friend, my partner, and with Clarence at my side, my band and I were able to tell a story far deeper than those simply contained in our music. His life, his memory, and his love will live on in that story and in our band.”

Clemons played with the E Street Band since 1972 after a dramatic initial first meeting with Bruce Springsteen immortalized in the song Tenth Avenue Freeze Out. His saxophone became a defining sound of the band. Clemons recalled their first meeting in an interview:

“One night we were playing in Asbury Park. I’d heard the Bruce Springsteen Band was nearby at a club called the Student Prince and on a break between sets I walked over there. On-stage, Bruce used to tell different versions of this story but I’m a Baptist, remember, so this is the truth. A rainy, windy night it was, and when I opened the door the whole thing flew off its hinges and blew away down the street. The band were on-stage, but staring at me framed in the doorway. And maybe that did make Bruce a little nervous because I just said, ‘I want to play with your band,’ and he said, ‘Sure, you do anything you want.’ The first song we did was an early version of Spirit in the Night. Bruce and I looked at each other and didn’t say anything, we just knew. We knew we were the missing links in each other’s lives. He was what I’d been searching for. In one way he was just a scrawny little kid. But he was a visionary. He wanted to follow his dream. So from then on I was part of history.”

Clarence Clemons played with dozens of other acts, most recently on the new Lady Gaga track The Edge of Glory — he’s even featured in the ’80s-inspired Edge of Glory video — and popped in on the American Idol finale to play with the pop star. Earlier this week Lady Gaga implored her fans to pray for her friend.