SheKnows is at a boutique hotel in Beverly Hills getting the latest from the cast members of the long-awaited, Spielberg-produced TNT sci-fi action series Falling Skies from cast members Noah Wyle and Drew Roy, who portray father and son. Episodes roll June 19 at 9 p.m.

At least five years in the making from concept to pilot realization and airdate, the show focuses on the survivors of an alien invasion that has destroyed the world’s technical capabilities along with most of its citizens. The remnants of humanity are resistance fighting in ragtag bands against a much stronger and tech-savvy enemy. These bug-like aliens are grabbing our kids and strapping mind-controlling “harnesses” on their backs to ensure a slave labor force, but what do they really want with our planet and our children? 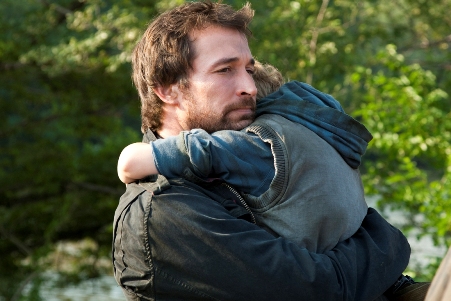 Noah explains that his character was a history professor specializing in military tactics that he is now having to use as a citizen/soldier. The aliens have enslaved one of his three sons and Hal, the older teen son played by cute Hannah Montana alum Drew Roy, is trying to protect his youngest bro while growing up too fast as a soldier. A relationship is developing between Dr. Anne Glass (Moon Bloodgood of Terminator Salvation), a pediatrician who now must function as surgeon and camp doctor while mourning her personal loss, and Noah’s Tom, a recent widower.

It’s obvious, in our meeting, that these actors have bonded big-time and are at ease teasing one another while they spill series secrets.

SheKnows: Noah, how important is it for you to do a show that has interpersonal relationships and a family aspect as opposed to it just being a sci-fi genre series with a lot of cool effects?

Noah Wyle: That was pretty key for me to be involved with it. We had the security in the knowledge that the space ships and aliens were going to be well taken care of given Mr. Spielberg’s involvement, so it became our responsibility to make sure that the level of continuity among the cast, whether in terms of establishing a certain level of threat or tension or menace, was consistent and that beat-by-beat, moment-to-moment, character-by-character, we were playing these scenarios out in as close to a realistic way as possible.

SheKnows: Drew, there’s a huge difference between a series like this and Hannah Montana. Did you always want to do an action role and are you a sci-fi fan in general?

Drew Roy: I was definitely attracted to action and science fiction was just a bonus on top of that. Going from Hannah Montana to this was quite a jump. I wouldn’t change anything. I had a great time on Hannah Montana and with the whole Disney thing but it’s definitely nice to have moved on to something like Falling Skies.

SheKnows: Now that you two have been kicking alien butt for a few episodes, what is your tip for defeating aliens?

Noah Wyle: I got really fond of the 50-caliber machine gun myself. 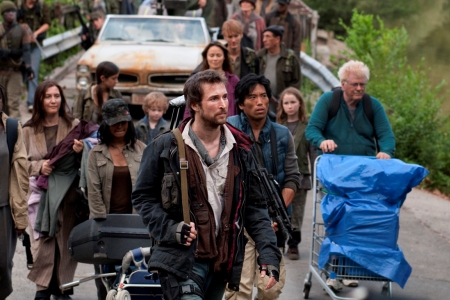 Drew Roy: Yeah. I’d say, the more the merrier. You don’t want to go in one-on-one.

SheKnows: What do you hope the showrunners let your characters do that hasn’t happened yet?

Noah Wyle: Well, my mom’s an orthopedic nurse and she forbade us kids from ever getting on the back of a motorcycle. She called them “donor-cycles” so for most of my life I never got on one. Then we get this script that said “Tom gets on his motorcycle and goes peeling out.” I thought, “Oh, my God, how am I gonna do this?” So I went out and had a little lesson and I don’t come naturally to motorcycle riding so I hope they write me some more because I’d like to get better at it.

SheKnows: Family seems to be a big theme in the show. I sense that even with the aliens, so what did everyone in the cast do to become a screen “family” after you met?

Noah Wyle: We shot the pilot two years ago so we had a year basically to wait around to figure out if we were going to commit to making a show and we saw each other throughout that period of time. Then, shooting on location there’s always a bonding aspect to any production when you’re not around any of your own creature comforts or your own distractions, you spend a lot more time socializing with your fellow workers than you would shooting at home. And shooting practical locations as opposed to studio work is even more so because you’re thrown into basically holding rooms or garages out of the elements. Shooting in very cold conditions has a bonding aspect to it too. If you work long enough hours all week long, you kind of want to blow off some steam on the weekends so we’d go out and kick our heels up together.

Falling Skies: Inside the aliens

SheKnows: Noah, what’s on set creature-wise? You saw the creature you were killing or not? 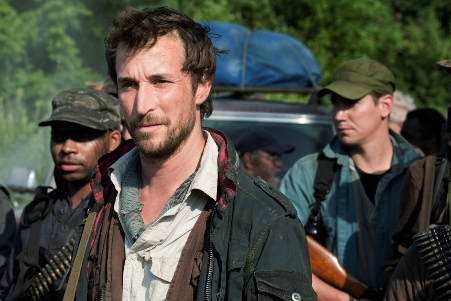 Noah Wyle: I would say, in terms of special effects, a third of it was green screen work where we were reacting to pieces of tape and tennis balls, a third of it was a guy in a puppeteering suit with other guys working limbs just below the camera frame and then another third would be just an appendage or limb or a claw that would come into frame.

SheKnows: That’s a wild combo. Were you surprised to see the finished aliens when you saw the pilot?

Noah Wyle: It wasn’t until I watched the final product that I went, “Oh my God! It looks like I’m really fightin’ that thing!” The puppeteer in the suit, as talented a man as he is, it’s an incredibly labor intensive apparatus to work with. The legs require individual puppeteers to move them and then the guy in the suit is deprived of oxygen so he had to be given breaks to cool down. That was very time consuming.

SheKnows: Will the character of Karen, Drew’s character Hal’s high school girlfriend, ever come back since the aliens grabbed her?

Noah Wyle: She’ll be back.

SheKnows: Is this show finally getting on the air like a 40th birthday present to you, Noah?

Noah Wyle: Yeah, turning 40 soon. It’s the gift that keeps on taking. That concept doesn’t seem alien at all. I’m ready for it. I’m not thrown by it in the least bit — looking forward to it. Any birthday cake wishes I have are health and longevity of life for my kids.

SheKnows: Can you talk about how the aliens take kids? And, Noah, they took your son. These kids are harnessed by an alien device. What’s up with that?

Noah Wyle: That dominates a huge portion of the early part of the season. My middle son, Ben, has been kidnapped by the aliens, as have a lot of adolescents, and pressed into a slave work force. The way they do this is with a harness which is a biological attachment that fuses to the kid’s spine and turns them into a walking zombie and they have sympathetic thoughts toward the alien that is in control. Retrieving these kids has been something we’ve tried to do. De-harnessing them is something we’ve been unsuccessful at doing so it’s not just a question of rescuing him, it’s de-harnessing him and then what are the long-lasting effects of wearing the harness as long as he has. And what we learn about the aliens through that process becomes a pivotal turning point in the middle of the season.

SheKnows: By the end of the season what have you each learned about your character?

Drew Roy: Hal goes from being this kid in the beginning to a man by the end of the series through these different battles and women and going after his brother.

Noah Wyle: More the women than the battles [laughs].

Drew Roy: Yeah. But having lost his brother and having this desire to get him back and going through that, he learns a lot about himself and it makes him grow up a lot quicker.

Noah Wyle: I would say that my guy Tom is pretty much an academic when the pilot starts and, while he’s pretty well-versed in military strategy and planning, from an historical perspective, I think he thinks those are pretty soft skills to bring to the table in this hour of dire need. As the episodes go on, he realizes that’s actually a pretty good skill set to have because he’s bringing to it the contemplative nature of a teacher and a very extensive knowledge about military hierarchy and training and tactic but he’s not really dogmatically adhered to either one so he’s able to fuse the two and create a new kind of leader which is the idea of the warrior/statesman that we’re trying to put over.

SheKnows: What alien or sci-fi movie is your favorite?

Noah Wyle: Maybe because I saw it while we were shooting the pilot but I just thought District Nine was terrific.

Drew Roy: The aliens aren’t vicious in this one but E.T.

SheKnows: Wrapping up, Noah, why was this show the one to bring you back to TV?

Noah Wyle: Well, to tell the truth, my kids were starting to get a little annoying [laughs], a little demanding. They want to talk and eat. No, I sort of actively stayed away from doing another TV show but I was working. I have a theater company here in town that I’ve redoubled my efforts in and I took off and did some small parts in movies here and there but I wanted the bulk of my time to be spent being a presence in my kids’ lives. Then, Michael Wright at TNT has been incredibly generous every year showing me the pilots he’s thinking about putting into production and I read this one and weighed the 10-episode time commitment against what had been a 24-episode time commitment and thought this may actually be perfect. It would afford me to be able to go out and scratch an itch and still have a quality of life at the same time so I jumped at it.