Selena Gomez may seem like the latest and greatest on the Hollywood scene, but this entertainment veteran has been working on some of your kids’ favorite shows since she was just a kid herself. Here, we turn the star spotlight on this hot young performer. 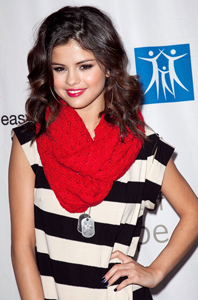 Selena Gomez: in the beginning

Selena Gomez may be getting a lot more press lately because of her romance with teen idol Justin Bieber, but the 18-year-old actress has been part of the Hollywood scene for 11 years — starting with a role in the favorite show of an entire generation of kids.

Gomez landed her first acting gig atdi the age of 7, when she was cast as Gianna in the hit kids’ show Barney & Friends. Here, she developed what would become a best friendship with fellow cast member and future TV star Demi Lovato. Selena’s love of performing was fostered by her mother, a teen mom who struggled to raise Selena by herself while juggling multiple jobs and stage roles.

In fact, her mom holds the credit for keeping Selena on the straight and narrow instead of under the so-called Disney curse that befell the likes of Lindsay Lohan and Britney Spears. Mom keeps Gomez under her watchful eye, telling People in 2008, “She never goes to movie premieres, wrap parties or anything related to the business without a parent. Period. That rule is not changing until she is 21! If she wasn’t allowed to do it in Texas, she’s not allowed to do it here.”

Selena Gomez‘s big break came in 2006, when she was discovered at a nationwide Disney scouting event. After a guest spot on The Suite Life of Zack & Cody and a guest-starring role in two seasons of Hannah Montana, Selena scored her own show with the popular Wizards of Waverly Place. In 2009, she was able to star with BFF Demi Lovato again, this time in the Disney channel movie, Princess Protection Program. When Wizards of Waverly Place: The Movie hit the small screen, it drew 11.4 million viewers, making the premiere second only to High School Musical 2 for the Disney Channel and cementing Selena’s reputation as a key tween draw.

Two major things have happened for Selena Gomez in the past year: She turned 18, and Wizards of Waverly Place wrapped. What’s an aging teen star to do? Parlay her small screen success into a music and movie career, of course! Selena Gomez & the Scene released their first album in 2009; it was certified gold within six months. The group’s second album, Kiss & Tell, debuted at number 4 on the Billboard 200; its third album, When the Sun Goes Down, is due out on June 28, a perfect tie-in to her new flick, Monte Carlo.

About that new movie: It’s just one of what Gomez hopes is many more in her new focus on film. Her first theatrical release, Ramona & Beezus, was met with positive reviews. She really dug into her role for Monte Carlo, learning how to play polo and working with a dialect coach to get two accents down pat.

Selena Gomez is one performer who consistenly gives back to her fans and communities. She’s been involved with the UR Votes Count campaign, encouraging teens to become politically active during the last presidential election. She acts as an ambassador for DoSomething.org and UNICEF, and is involved with Disney’s Friends for Change, promoting environmentally friendly behavior.

Selena Gomez: From child star to a grown-up entertainment force… from the small screen to the recording studio and finally to major motion pictures, Selena Gomez is proving that she is a star for all ages.

Check out the Selena photo gallery >>

Read on for more Selena Gomez