Tom Cruise will be singing and dancing in the movie adaptation of the Broadway hit Rock of Ages. Check out your first look of Tom Cruise as Stacee Jaxx.

Tom Cruise rose to fame by singing You’ve Lost That Lovin’ Feelin’ in Top Gun — and now his career has come full circle as he will be wailing out the ’80s power ballads in the big-screen adaptation of Rock of Ages. 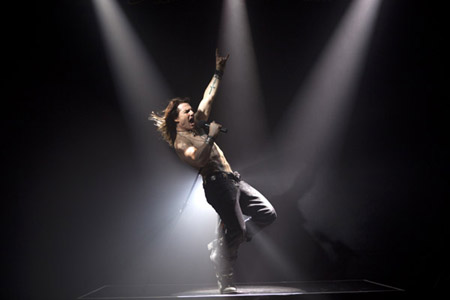 Tom Cruise posted this photo of himself as his Rock of Ages character, Stacee Jaxx, on his website. Check out his long hair and tattoos!

So we know Cruise looks the part — but can he sing? Shankman said Cruise first caught his eye by playing the hilarious and over-the-top alter ego of Les Grossman on MTV — and put him to the test with some vocal coaching.

Shankman goes on to tell EW that his grandfather was an opera singer so he is “genetically predisposed” to sing.

We know he can dance and slide in his underwear (ahem, Risky Business) — but can he really dance?

“Does Tom dance? Let me put it this way. He is dancing so much, we are all exhausted and laying down on the floor. He is dancing us into the ground. I’ve never seen someone who wants to rehearse more,” Shankman said.

Rock of Ages is slated for next summer and also stars Julianne Hough and Russell Brand.