Model Maggie Rizer is having a baby! No word yet on whether or not the supermodel will be walking the runway pregnant. 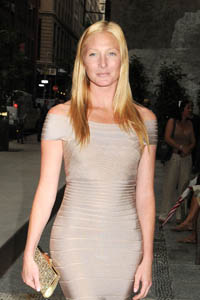 “It’s true! Alex and I couldn’t possibly be more excited! We will be welcoming a baby boy this November!” the happy mom-to-be wrote.

Someone’s not too happy about the news: The couple’s dog Bea.

“Bea is a little upset as she hoped to be gaining a little sister rather than another brother but… we told her to keep her paws up for the next time around,” Rizer added.

According to her post, she’s learning a lot about motherhood already.

“I’ve also recently learned that the stork does not in fact drop the baby by the door,” she joked. “I guess there are always new things to learn!”

In 1999, Rizer appeared on the cover of American Vogue for the first time, alongside supermodel Kate Moss. The following year, she scored her second Vogue cover, this time alongside Carmen Kass, Frankie Rayder and Angela Lindvall.

Since, she’s been featured in countless fashion campaigns, including Gap, Louis Vuitton and Calvin Klein, and she appeared in an episode of Sex and the City, playing a model. She also appeared in Zoolander, although the scene she was in was later cut. In it, she played a model, as well. Her only line was: “Come and join the sex party!”