Jason Sudeikis has been riding the wave of popularity lately. Between Saturday Night Live, Hall Pass and Horrible Bosses, Sudeikis is making us laugh on the big and small screen. Now, he’s cracking us up in Playboy‘s July 20Q, answering questions about his “spank bank,” his joke about seeing January Jones naked and whether he could actually kill anyone, a la Horrible Bosses. 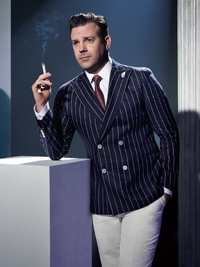 There’s more to the July issue of Playboy than an awkward cover with Crystal Harris introduced as Mrs. Hefner. Jason Sudeikis is featured in Playboy’s 20Q this month and he chats candidly about seeing January Jones naked, Hollywood actresses he has yet to sleep with and his spank bank.

Sudeikis has been linked to many famous actresses such as Jennifer Aniston, Scarlett Johansson and January Jones, but he has yet to get with Betty White. “I think I missed my opportunity with Betty White,” he joked. “She got too big too soon on the second go-around. There was a whole chunk of time between Golden Girls and that Snickers commercial when I could’ve made something happen. Now I can’t get near her.”

The big disappointments in life, huh?

Playboy asked Sudeikis whether he had any regrets about joking that he’d seen January Jones naked when they were dating last summer. “The bummer of that whole situation is she made a joke right back at me and nobody got it,” he said. “Nobody gave her credit for what I thought was a pretty good zinger. I was like, ‘Come on, now. Let the gal have some fun.'” (Jones responded, “Nor will he after those comments.”)

Sudeikis didn’t drop any baby daddy jokes in his Playboy interview, but he did joke a lot — and we mean a lot — about his personal, um, hand habits. When asked about how his scene in Hall Pass where he is busted getting down with himself in a minivan while blaring Air Supply compared with other classic personal time movie moments (such as There’s Something About Mary), Sudeikis joked that he wasn’t acting.

“One key difference is that I was really doing it,” he said. “That wasn’t a part of the script; it was just something I was doing during a break in shooting. They were doing a lighting setup and they caught me. We’re actually in litigation for that whole scene.”

Bad mental image! He also revealed that he did a lot of research for the scene, but we’ll let you read about that in the interview. You can see all of Jason Sudeikis’ 20Q responses in the July issue of Playboy.