Did Kelsey Grammer send his ex-wife Camille an email in which he claims she smells like beef jerky? Camille says yes. Kelsey says he was hacked. 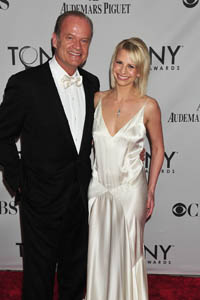 Kelsey Grammer is being accused of sending a not-so-flattering email to his ex-wife, Camille.

“Camille smells like beef jerky. Goodnight,” the subject header of the email read.

So, what’s this beef all about? According to Kelsey, 56, he didn’t write and send the email that pronounces Camille, 42, smells beefy. While the email came from Kelsey’s account, Kelsey admits, he says that unnamed “others” had access to his email account and sent the nasty message without his knowledge or consent.

“May I suggest that it is ‘they’ who owe you an apology,” Kelsey asserted regarding whether or not he’s sorry for the food-calling.

Currently, the couple is engaged in a very public, acrimonious custody battle over their children: daughter Mason, 9, and son Jude, 6. The Frasier and Cheers star has suggested that he and his ex split up their children, with Kelsey taking their son and Camille taking their daughter. Camille wants to maintain custody of the children and keep them together.

Last August, Kelsey and Camille announced their separation. Not long after, Kelsey announced that he was having a child with his new girlfriend, Kayte. In October, the new couple announced Kayte had miscarried. They became engaged in December and married two weeks after Kelsey’s divorce from Camille was finalized.

Have you ever sent an email and regretted it?