Vanessa Hudgens shows her sexy and flirty side posing in lingerie and floral tops in the new campaign for Candie’s. 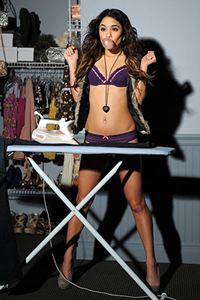 High School Musical actress Vanessa Hudgens is the new face of Candie’s (following former Candie’s girls Britney Spears and Fergie) and is working the camera for her second campaign by posing in sexy purple lingerie and a fur vest.

The new line of Candie’s, which will be available at Kohl’s, features “Candie’s-isms,” including “Candie’s girls believe you can do anything in heels.”

Hudgens says her fashion rules are that she doesn’t really have any rules! “The more I grow up, the more I’ve been comfortable with my style, therefore allowing me to really experiment with all different looks,” she tells People, citing Bianca Jagger and Cher as her style icons from the ’60s and ’70s.

What modern-day style icons does she look up to? “I think Miley [Cyrus] has amazing style. Mary-Kate and Ashley Olsen. Ashley Tisdale, of course… Blake Lively,” she says. “They all play with fashion and have fun with it!”

This isn’t the first time Vanessa has been in the news for sexy photos. Nude photos of the actress have circulated around the Internet the last couple of years, causing much embarrassment to the 22-year-old. “It was very traumatic, and I am extremely upset it happened. I hope all my fans can learn from my mistake and make smart decisions,” she said. 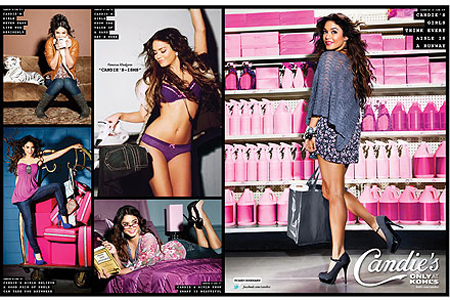 Tell us: What do you think of Vanessa Hudgens’ new Candie’s campaign?

Watch behind the scenes at the Candie’s photo shoot: