Rita Wilson is adding another creative endeavor to her impressive resume: Website editor! 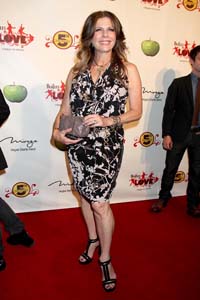 Wilson, 54, is set to take on the job as editor at the Huffington Post’s new site for women over 40, aptly named Huff/Post 40.

The website will be “both about news and about people sharing their own experiences about that stage in life,” Huffington Post chief Ariana Huffington said after the announcement.

“It’s important to cover this with a sense of joy about this age… that’s another thing that’s often missing from the writing about this stage of life,” Huffington said of the new site. “You worry about approval less; you’re more clear about who you are — all those things are so liberating.”

“It’s an age where you can look less at the past and more into the future.”

This won’t be the first time that Mrs. Hanks has forayed into journalism: The actress has written stories for O, The Oprah Magazine and she’s been a contributing editor to Harper’s Bazaar for five years.

But, will Wilson fit in with the Huffington Post’s style?

“She’s always following her own passions and making things happen, so I think she’s a great role model,” Huffington said.

What do you think of Rita Wilson’s latest creative project?