Kenny Chesney said his career didn’t take off until he stopped trying to emulate one of his country music heroes.

Country superstar Kenny Chesney is back on top with a new tour and an appearance with singer Grace Potter this morning on NBC’s Today Show. Chesney performed Somewhere With You solo and then Potter joined him for You and Tequila, turning 30 Rock into a country music festival. 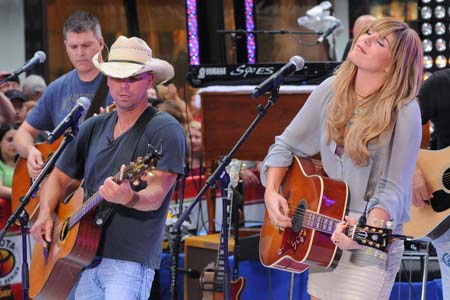 It’s hard to believe there was a time when Chesney struggled for success — and he blames country music legend George Strait for it.

“Like a lot of people did, and I was guilty of it, George Strait was the guy who was the model that everybody at the time, and still today, wanted to be like. They wanted to emulate him,” Chesney said during Billboard’s Country Music Summit last week. “As much as I love him and respect him, the moment that I quit trying to be him was the moment my life changed.”

And it did — Chesney’s brand of beach-worthy country took hold with fans, helping him sell millions of records and become a superstar.

“My career was really odd, because I literally had a greatest hits album out and nobody knew who I was. They knew the songs, but they didn’t know me,” he said.

“Once I started writing real, honest songs about my life — about things that I love and my life in the islands and my life back in East Tennessee — and really tried to get my live show where I wanted it, that’s when my life changed.”

Don’t worry, Kenny — everyone knows who you are now.

Will you check out Kenny Chesney’s tour this summer?