Did Kim Kardashian want to be a runway model? Her sister Kendall Jenner thinks so — and now Kardashian is trying to live her dreams through her. 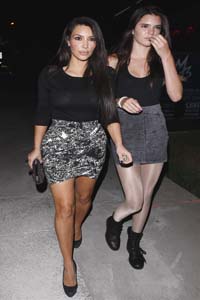 Kim Kardashian has accomplished a lot of things in her life — she’s a reality show queen, businesswoman and sex tape connoisseur, but did she really want to model on the catwalk?

Looks like it, according to a clip for the upcoming episode of Keeping Up with the Kardashians. In the episode, Kardashian chides her leggy little sis, Kendall Jenner, for not taking her runway walking lessons seriously.

“You knew from the beginning I’ve been scared to do runway. I really don’t want to be here!” Jenner told Kardashian.

Jenner then bolts out of the room, much to the chagrin of her engaged big sister.

“There are no words to describe how mad I am at Kendall right now,” Kardashian said.

“You’re not taking advantage of your opportunities,” she told her teen sis. Uh, how is it an opportunity if she doesn’t want to do it?

“Kim originally wanted to do runway but she was too short for it, so I think she’s taking her fantasy out on me,” Jenner later reveals in a confessional interview.

We can’t say we’re surprised — after all, Kardashian has accomplished pretty much everything else she wants, except for high-fashion modeling. The tall and thin teen looks more like a typical model than Kardashian.

Will they work it out? Check out Keeping Up with the Kardashians Sunday night on E!

Do you think Kim Kardashian is turning into a control freak like her mother?