Megan Fox is back at the place where she married husband Brian Austin Green last year. Why is he crying, then? 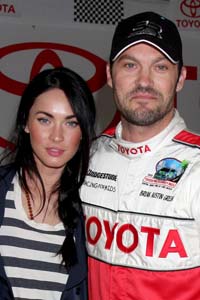 Remember Megan Fox? Yeah, it’s been a minute since the sultry actress has been in the news — but she is now, thanks to her upcoming one-year anniversary to hubby Brian Austin Green.

Now, the couple is planning to renew their vows.

“I didn’t think that I was into it until my relationship with Brian,” the actress said at the Maui Film Festival while promoting Na Nai’a: Legend of the Dolphins. “He’s very sensitive and very emotional. He’s a Cancer so he’s very all about feelings and relationships and he cries about everything. He’ll want to do it so I’ll do it for him.”

Will it happen while she’s in Hawaii for the film festival? She didn’t give any indication.

“It coincides with my anniversary,” she said of her trip back to the island state. “We got married in Hawaii, so it felt like the perfect little week vacation.”

The couple might be facing one of their fears while in Hawaii — and it has nothing to do with weddings or vows.

“My husband is terrified of sharks but we’re going to do it anyway,” Fox told E! “Sharks don’t usually go where there are tons of dolphins so we can do it. I didn’t used to be [scared of sharks], but I am now because of him. His fear is so intense, it’s smothered me and now I’m afraid.”

Wow, we’re sure Green loves that his wife told the world that he’s both a crybaby and afraid of sharks. Guess we know who wears the pants in that relationship.

Do you think a one-year anniversary is too soon to renew wedding vows?