The Bachelorette‘s Ashley Hebert made an appearance on The Tonight Show with Jay Leno — and found she had an unlikely supporter in Curb Your Enthusiasm‘s Larry David.

Ashley Hebert appeared on The Tonight Show with Jay Leno to talk about The Bachelorette — and the drama with Bentley Williams. What was hilarious was not her conversation with Leno, but with his earlier guest on the show, Curb Your Enthusiasm’sLarry David, who could not help but interject his opinion into the conversation. 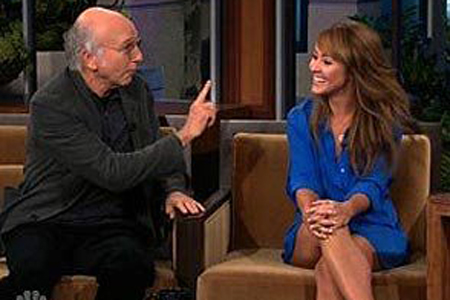 Leno asked her about Bentley, calling him the guy that “broke your heart.” He asked her if she was being naive and if he was the definition of a “player.”

“I think I was naive and I think I saw what I wanted to see,” she said. “He left me with an open door and I reached a point where I was like in order for me to move forward I really need to figure it out. And I do see him again.”

“You fell for Bentley?” Larry asked. “It’s a cool name — Bentley!” Leno quickly pointed out that Bentley is a lot cooler name than Larry.

Larry went on to joke: “Were any of the gentlemen bald?” prompting Hebert to say he should be the next Bachelor.

Ashley went on to say that she was warned that Bentley was on the show for the wrong reasons.

“I’m going to kill that mofo,” Larry joked. “I swear to God, I don’t know what this guy did, but I really dislike him!”

When Leno asked if she would go out with Bentley again, she paused… prompting Larry to say:

Watch the hilarious conversation about Bentley between Larry David and Ashley here: