Lady Gaga’s music video for The Edge of Glory debuted with a different look compared to her other story-driven videos — just Gaga dancing in the street.

Fans have come to expect a certain amount of drama and flair when it comes to Lady Gaga’s videos, but they got something a bit more understated when she dropped her video for The Edge of Glory. 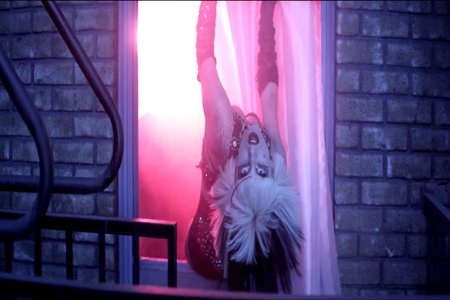 She’s taken on a lot of characters in her past videos including Mary Magdalene in Judas. For The Edge of Glory she went simple, dancing down a fire escape and taking it to the street steps of New York (we’re pretty sure it was NY).

Earlier in the week, Lady Gaga called on her fans to rally in support of Clarence Clemons after he suffered a stroke on June 12. “Little monsters, my very close friend + musician on The Edge of Glory, Clarence Clemons is very sick,” she tweeted. “Can we all make some get well videos?”

Gaga’s style in the video is pretty straightforward. She pulls off her signature two-toned coif of blond-ish and black tresses and it’s cut as blunt as it could possibly be.

What’s interesting is that she sticks to one costume — unless you count her taking off her jacket. We’re used to seeing her wardrobe change like a quick-change artist but this was understated and we kind of like it.

Check out Lady Gaga’s video for The Edge of Glory and weigh in on her latest efforts.