Kat Von D and Jesse James have not broken up and are still planning a summer wedding, despite reports the couple has split. 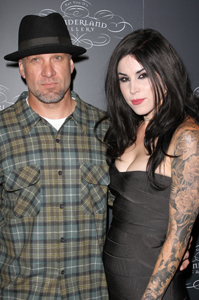 Despite rumors that the most hated couple in America has broken up, Kat Von D and Jesse James are still going strong — and still planning a summer wedding.

Jesse James, who spent the first half of the year talking nonstop about his breakup with Sandra Bullock for his book American Outlaw, denied the breakup rumors to People.

“That is absolutely not true,” he said. “We’re still going strong. Things are completely good with us.”

“That’s the furthest thing from the truth,” chimed in Kat Von D.

The couple, who became engaged in January, is planning a summer wedding to coincide with the one-year anniversary of the day they began dating.

You know what really can’t come soon enough? The paycheck he and Kat Von D will get for selling their wedding details to the tabloids.