The highly anticipated, Steven Spielberg-produced TNT series Falling Skies premieres this weekend. We were lucky enough to chat with one of its stars, Moon Bloodgood, about the show, the aliens and why the humans in the series are sometimes more dangerous. 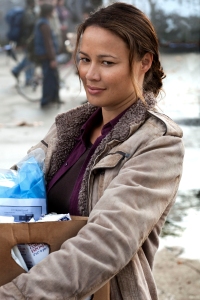 Moon Bloodgood is a sci-fi queen. From Terminator: Salvation to Journeyman, she’s a staple in the genre. Now she stars in the upcoming alien invasion show, Falling Skies. The show takes place post-invasion, after the world has collapsed and humans are fighting for survival.

(On a personal note, I moderated the Falling Skies panel at WonderCon this April and I’ve seen a number of the shows. Cancel your plans on June 19, grab your dad — it’s Father’s Day — and plant yourselves in front of TNT at 9 p.m. You’ll thank me.)

Bloodgood gives us a look at her character, the show and why it’s more about human versus human than human versus aliens. Check out the prequel web comics here!

Going to the Moon

SheKnows: Tell us a bit about the character you play.
Moon Bloodgood: I play a former pediatrician. Her name is Anne Glass and she lost her child and her husband during the invasion. She gravitates toward Noah Wyle’s character Tom Mason, and the whole Mason family, and becomes his confidant… She sort of leads the people and the civilians because she’s a doctor, the only doctor they have. She’s a mother bear to all the civilians and fights against Will Patton (Captain Weaver) because he’s part of the military. Something romantically sort of evolves very subtly between Tom Mason and Anne.

SheKnows: It’s really interesting that this show starts post invasion. We don’t really know everything that happened. How much info did they give you on that? Did you have to come up with that yourself as an actor?

Moon Bloodgood: Well, they didn’t give us a lot. It takes place six months after, so we’re a little rattled and it’s very desolate and we’re starting to feel the hunger pangs. But I did my own kind of backstory, not so much about Boston, but about my family and my immediate family and the day of the invasion and what happened after that, because they did land for a while and we didn’t know that they were hostile. Then they decided to attack. We never knew what their intensions were. But I did a little bit of backstory on that but it’s all a bit of a clouded mystery, exactly what took place.

SheKnows: There are moments when you see the aliens in certain episodes and you find yourself feeling a little sympathy towards them. What can you tell us about the aliens and how the relationship progresses?

Moon Bloodgood: I don’t know if it was an intentional thing, without revealing too much, but definitely one of the two aliens… there is something sympathetic about the way it looks, and I think there was a deliberate choice to make it more empathetic, because it’s harder to kill something that looks more human. And there is a mystery. There is a reveal even with this particular alien. You kind of see it in the eyes. And I like that. I have a scene where that was really helpful for me. If something looks alien and grotesque, it’s easier to kill and not feel anything, not connect with it. But if it has human-like qualities, our own personal narcissism, we tend to feel more empathy. 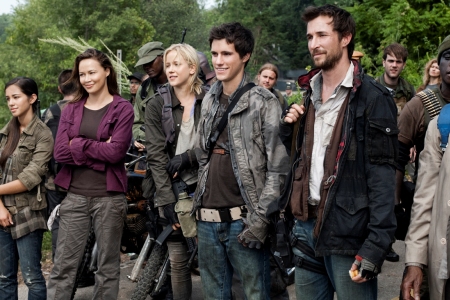 SheKnows: What was your reaction when you saw the Skitters for the first time?

Moon Bloodgood: I loved it. When I first saw some footage of the Skitter in the actual suit, it was incredible. I was really happy. You get really nervous when you do science fiction, about the part that you can’t control. How the effects are going to be, how much money are they going to put into it, is it going to look silly? Because that part has to be really realistic and frightening or you lose a big part of the scare or the big reveal.

Falling for the drama

SheKnows: One of the things I love about this show is that it’s often more about human versus human than human versus alien.

Moon Bloodgood: I totally agree. And I think that… it’s also very intense. This show’s primary story, the first story would be about the family and the human condition and the secondary story would be about the aliens. I think there has always been a real deliberate collective agreement that this show is a drama about people and characters, and that the aliens are only another part of that. And really, how humans can become the worst of themselves and desperate and vile and do things that are immoral when put under pressure.

SheKnows: Can you talk a bit about civilians versus military and how that drama plays out?

Moon Bloodgood: Well, it’s great because in the beginning, you sort of see me go and confront Will Patton’s character Weaver because in his attempt to protect us, he started to give the military more rations and give them better shelter. And both Noah’s character and I have to remind him that this is also about the civilians… The reason why we do it in the first place is so they are protected, and if we start to separate and divide and only favor the military, we’re kind of losing the point. I kind of represent the civilians because they come to me and I hear their woes and their worries because I’m the doctor. They have my ear.

SheKnows: Speaking of playing a doctor, did Noah Wyle [who played a doctor on E.R.] give you any advice about that?

Moon Bloodgood: Absolutely. He gave me very specific things to do. For instance, when I was doing CPR, or when I was using a needle… just ways to do it without making it look ridiculous. Still believable. He gave me little nudges on what to do when I was performing my doctor procedures that I know very little about. Anne is not supposed to know a lot. She’s a pediatrician. She’s not supposed to know as much as a heart surgeon. He was really good at showing me how to… take off your gloves and things like that.

SheKnows: Do you have any fight scenes?

Moon Bloodgood: You know, I like this character because she’s not someone who knows how to fight. She’s non-violent and doesn’t want that in her life. It was really interesting when I had to actually learn how to hold a gun and hit. It’s funny that I got to play the person who doesn’t know how to fight. She’s not necessarily the toughest girl in the room. That was really interesting. But I do have to defend myself at some point and come face to face with the aspect of humans that are violent and I have to be able to protect myself.

SheKnows: How would you be in the apocalypse? 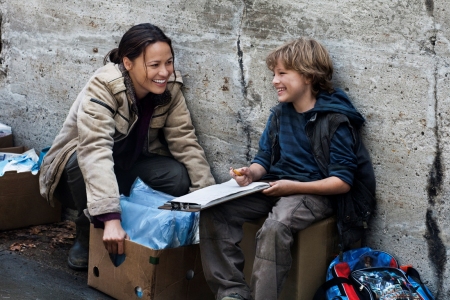 Moon Bloodgood: I mean I’d like to believe I’d kick some ass, but I don’t know. I don’t know. I’d kind of try to hide and I’d try to find information and find out where to run to to escape the aliens. When I was younger I would have said I would have fought. I don’t know. I certainly don’t think I’d be as brave as Anne is. I think she’s a lot more level-headed and brave than I am.

SheKnows: Are you a sci-fi fan? You do so many sci-fi roles.

Moon Bloodgood: I am. I definitely am. I don’t know how you could do so much science fiction and not be a fan. I started off as a fan and my only theory about why I try to do so much science fiction… I understand the material very well, and maybe I represent the future. When you think of the future you kind of think of a mixed race, where race is inconsequential. It’s really about surviving… you don’t have time to worry about that stuff. You worry about the basic necessities like food, water and shelter. So I think my ethnic mixed background and maybe that I gravitate more to those stories and I audition more. I don’t turn down going in for those roles because I like them.