Angela Lansbury, after decades of stellar work, could easily retire, yet Lansbury could not even consider that option when she is continually asked to work with the likes of the world’s biggest stars including Jim Carrey in Mr. Popper’s Penguins.

Angela Lansbury is an icon after her transcendent work on television, stage and screen. Lansbury has won a record five Tony Awards, six Golden Globe Awards and has been nominated for 18 Emmy Awards and three Academy Awards. 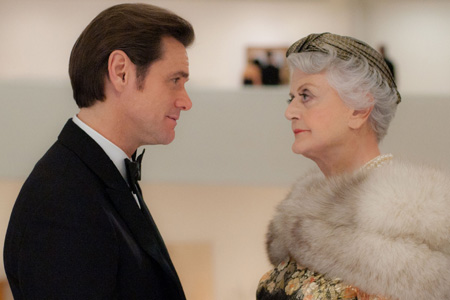 Lansbury made her film debut in 1944 in the film Gaslight after arriving from her native England and was rewarded with her first Oscar nomination. The very next year she earned her second Academy Award nomination for her work in Oscar Wilde’s The Picture of Dorian Gray.

Even though she has earned raves on screen and set the Broadway stage afire with those record-setting Tony Awards, Lansbury is best known in the U.S. for her starring role in Murder, She Wrote. Her portrayal of Jessica Fletcher has forever endeared her to American audiences.

Now, Lansbury is back on the big screen in the family comedy Mr. Popper’s Penguins and the icon sat with SheKnows for a video interview to talk the finer points of performing across a crazy comic such as Jim Carrey and where her countless accolades rank. Hint: It’s like choosing a favorite child!