Denise Richards is writing a memoir about her tumultuous relationship with Charlie Sheen — although she apparently plans on leaving out the good stuff, focusing on the “beautiful love story” between the two. Has she been drinking tiger blood — or is she keeping it nice for the sake of her daughters? 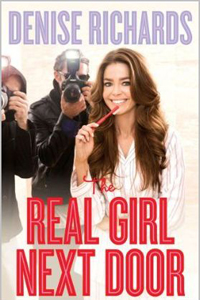 Denise Richards is writing an “inspirational” memoir called The Real Girl Next Door, out July 27th. If you are expecting to read the inside scoop on their fights or his crazy, weirdo behavior, you may be disappointed.

It is surprising she would be so nice to Sheen, especially after he went on a Twitter rant after she took their two dogs, saying: “We must bombard with warlock Napalm, that traitor and loser whore #DUH-neese POOR-ards. A vile kidnapper and now dog thief. hate.”

“I get into the good stuff about my marriage, because people have only read the rotten stuff,” she tells Radar Online. “So, you know, there was a beautiful love story between he and I and then it went the way it went.”

“It’s not a tell-all, but it’s hopefully something that’s inspiring,” she goes on to say. “I went through a whole lot and I get asked a lot of questions about that time in my life, so I figured I would write my story and hopefully anyone that has been, you know, dealing with challenges will know that there is light at the end of the tunnel.”

The couple has two beautiful girls together, six-year-old Lola and seven-year-old Sammy, however, between the custody fights and name-calling, their relationship has definitely gone downhill.

Still, Richards insists her book is not a “tell-all” but will go into her feelings during the divorce. “I talk more about how I felt during that time, because I think a lot of women can relate to that, going through a divorce and custody and being a single parent, trying to work and all that stuff.”

Richards also says she wasn’t surprised by Sheen’s recent crazy and out-of-control behavior. “But the thing is I’ve dealt with it for a very long time, so it’s not new for us. It’s just new for other people. But as far as the media, I protect my children from that. I don’t keep the news on when they’re around.”

Tell us: Do you think Denise Richards’ memoir will be sensational — or a snore-fest?