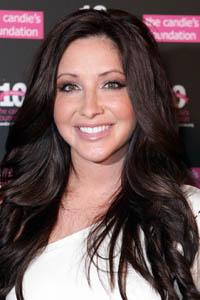 Kathy Griffin has never been known for holding back when it comes to her jokes, and in her new comedy special she lays a scathing smack-down on Bristol Palin‘s post-plastic surgery face.

“So Bristol Palin has this brand new chin, and I swear to God she looks like Jay Leno,” Griffin starts. “It’s like she took a picture of Jay Leno, went to the dentist and said, ‘Can I have this?’ I mean, I’m just saying. It’s like out there.”

Then Griffin reads out loud the statement that Sarah Palin‘s daughter released regarding her surgical procedures. In the statement, Bristol claims to have had “corrective jaw surgery.” It continues, “The surgery was necessary for medical reasons.”

“I am absolutely thrilled with the results,” Palin told reporters previously of her new look. In her first appearance after undergoing surgery, it was clear she had done something radical to her face. Her chin is markedly different, her face is narrower and her brow seems higher.

Do you think Bristol Palin’s plastic surgery was for medical reasons or looks?