Jennifer Aniston is wasting no time taking her new relationship with Justin Theroux to a more serious level. They’ve moved in together. 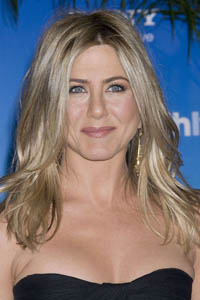 Jennifer Aniston and Justin Theroux are totally over being friends: They’re living together! Not only that, but the celebrity couple was seen wearing matching rings, and Aniston is telling everyone that the actor is her boyfriend.

“He’s living at her place in L.A.!” a source reports. “And she’s introducing him as her boyfriend.”

But… are they engaged?

Yesterday, Aniston, 42, and Theroux, 39, were spotted strolling around New York City together, and they were sporting matching gold rings on their left ring fingers. They’ve each been seen wearing the rings at other times this month. Aniston’s ring has her name on it, but nobody knows if Justin’s ring bears his name — or Aniston’s. So far, it’s unclear if the rings are the real thing or a publicity stunt.

Last weekend, Theroux’s girlfriend of 14 years, Heidi Bivens, moved out of the New York City home she was sharing with Theroux, making Aniston the possible other woman in a three-way scenario that has reminded some of Brad Pitt, Angelina Jolie and Aniston years ago.

Aniston and Theroux started getting close last fall while shooting their upcoming movie Wanderlust in Georgia. Now that Theroux has ditched the New York City digs he shared with his ex-girlfriend for six years, it sounds like the actor’s got plenty of time to spend with Aniston in her Los Angeles place playing house with his new girlfriend.

Is Aniston the other woman?