Terrifying new details have emerged in the case surrounding an alleged plot to rob and murder singer Joss Stone.

Oh, wow. More details have emerged about the plot to kidnap and murder British soul singer Joss Stone. British tabloid The Sun broke the story about two men arrested near Stone’s home with materials necessary to kill the singer and songwriter. 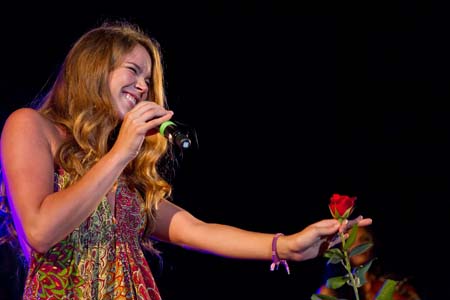 “The alleged plot was foiled by sharp-eyed neighbors who saw two black men acting suspiciously in a red Fiat Punto. The car was being driven slowly around the isolated lanes of the Cullompton area,” a source told The Sun.

We didn’t understand just how serious the situation was — until now.

Police found various notes in the suspects’ vehicle that described exactly what they planned to do when they captured the singer.

“Rob and kill, money in the safe, Joscelyn rob,” one note said, according to The Hollywood Reporter.

“Find a river to dump her in,” read another. Cops also found a Samurai sword, various knives, a hammer, a body bag, gloves and balaclavas inside the car.

Scary, scary stuff. The two main suspects — Junior Bradshaw, 31, and Kevin Liverpool, 30 — are both from Manchester, England, and are due in court to face charges on July 1.

How is Stone taking the news? A rep for the singer said she’s “absolutely fine and getting on with life as normal.”

What do you think Joss Stone should do to ensure her safety?

54 seconds ago
by Kristyn Burtt