Moneyball is a biopic based on baseball general manager Billy Beane (Brad Pitt) and his team, the Oakland A’s. It follows Beane as he tries to assemble a group of players who are talented but also cheap. He throws conventional sports wisdom to the wind when he puts his hopes into the hands of a young college grad called Peter Brand (Jonah Hill). 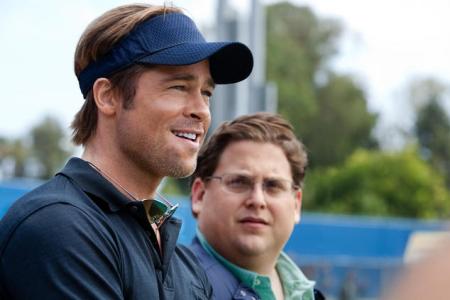 Beane and Brand set out to recruit players that most scouts consider flawed to form a team of professional misfits. None of them are great overall performers but they each understand the basics of the game. It’s a logic that Beane uses to change the art of team building.

Moneyball follows his trial and error journey of convincing the baseball league, the city and himself that what he’s doing will work. The film looks like it rides solely on Brad Pitt’s ability to deliver a strong but still vulnerable performance.

Besides having an amazing cast, Moneyball was written by Steve Zaillian (Schindler’s List) and Aaron Sorkin (The Social Network). That’s not a bad duo to have on your creative team. This movie is dripping with serious Oscar potential.

Moneyball opens in theaters on September 23.