Metallica is getting ready to release a new album of material with former Velvet Underground legend Lou Reed.

We have to say, this is one of the more unusual — and interesting — musical collaborations we’ve heard about lately. Legendary singer Lou Reed and heavy metal mega-band Metallica are planning on releasing an album together, according to a message posted on the band’s website. 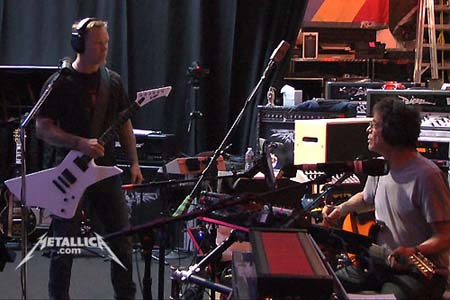 “A few months ago our own Kirk Hammett hinted at a new Metallica project that’s ‘not really 100 percent a Metallica record,'” the band wrote. “While Kirk may have jumped the gun a little (and has since been properly punished with a series of push-ups!), we are more than proud to announce that we have just completed recording a full length album that is a collaboration with none other than the legendary Lou Reed.”

The band first performed with Reed at the 2009 Rock and Roll Hall of Fame ceremony.

“Some of you astute Bay Area residents may have picked up news of recent Lou Reed sightings in the greater San Francisco area and we have indeed been working at our home studio at HQ on and off over the last few months. In what would be lightning speed for a Metallica related project, we recorded ten songs during this time and while at this moment we’re not exactly sure when you’ll hear it, we’re beyond excited to share with you that the recording sessions wrapped up last week.”

Reed is best known for both his solo work and time with the Velvet Underground.

“We can’t wait for you to listen to the finished record, so as we like to hear ourselves say around here, keep watching this spot for updates… we’ll be back with more details as they come together,” Metallica wrote.

What do you think of a Lou Reed and Metallica collaboration? Will you buy the album?