Gene Simmons might be a rocker — and possibly a cheater — but his two kids with longtime girlfriend Shannon Tweed are alarmingly normal.

Much of the focus of the first episode of the new season of Gene Simmons’ Family Jewels was on his philandering ways and the tension between the rocker and longtime love Shannon Tweed. 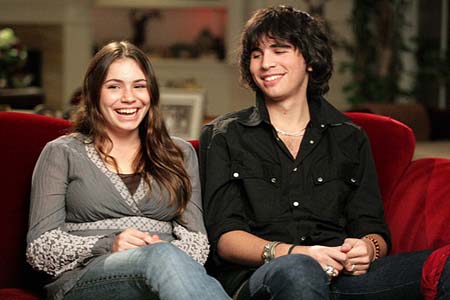 “Oh, we’re going to show lots of warts this year,” Tweed told TV Guide. “There were a lot of things that I kept to myself until they [their two children] did go to college. A lot of mothers do that. A lot of couples stay together for the children. I think it’s an obligation that parents have… You made a commitment, you had children, you should see it through.”

And what about those children? Simmons and Tweed’s? ?‘jewels’ — son Nick, 22, and daughter Sophie, 18 — are both way more normal than we ever expected. After all, kids that grow up in Hollywood usually turn out like Charlie Sheen and Paris Hilton — but both Simmons kids are in college and have normal chores.

Why? It turns out that Simmons and former Playboy Playmate Tweed don’t just give their kids whatever they want.

“What I wanna do is what every bird does in its nest — it forces the kids to go out there and figure it out for themselves. By the way, in terms of an inheritance and stuff, they’re gonna be taken care of, but they will never be rich off my money. Because every year they should be forced to get up out of bed, and go out and work and make their own way,” Simmons said a few years back about his kids.

“The point is, there’s gonna be a yearly allowance so that their rent and their food and all that stuff’s gonna be taken care of, but if you want riches, you should do that yourself — you should never thank your parents, ‘I was born into money.’ ‘Well, that’s nice, but what have you done lately?’ Because I don’t want them to say, ‘Thanks, dad, for making me rich.’ No, you wanna be able to stand on your own two feet and say, ‘I did that.'”

Honestly, we have to commend that. The two kids are definitely not brats — you aren’t hearing about them in clubs and getting into drugs. So, we might not like his comments about bedding 5,000 women, but we do commend Simmons and Tweed for their perfect little jewels.