Bridesmaids star Kristen Wiig is quite happy to leave the big white dress to another woman. While she’s hoping for kids in the future, tying the knot is decidedly not on the to-do list. 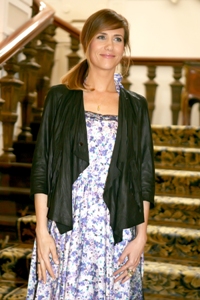 Kristen Wiig, who walked down the aisle of matrimony once before, isn’t likely to do it again. The Bridesmaids star, who is dating actor/filmmaker Brian Petsos, recently opened up about her family plans for the future.

“Marriage, probably not,” said 37-year-old Kristen Wiig. “I’ve been in a relationship for years now and we consider ourselves married but I don’t see the need for an actual wedding.”

The SNL star continued, “But babies, yes — I’d love to have kids.”

Speaking of her decision to both write and act in Bridesmaids, Kristen Wiig explained, “I wanted to do something about this chapter because when you’re in your 20s you don’t have to decide on anything almost.”

Kristen continued, “But in your 30s, I feel there’s so much pressure, especially for women, to declare what their life’s going to be and what their career is. And are you married yet? Are you single? But you’re 30.”

Though Kristen has found love with Brian Petsos, she’s careful to keep in close touch with her friends. “And girlfriends are so important,” she says. “You can have a boyfriend or husband when you’re 30 but you still need your girlfriends.”

For more on this funny lady and Bridesmaids, check out SheKnows’ 10 questions with Kristen Wiig!