Kelly Osbourne had to put her three-month-old Pomeranian to sleep after he was diagnosed with a brain defect. 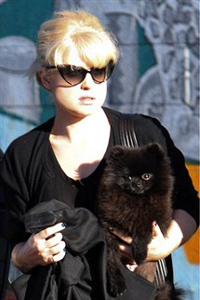 Only one year after losing her Pomeranian puppy Woody, who died of unknown causes, Kelly Osbourne had to put her new three-month-old Pomeranian, Noodles, to sleep.

“My poor baby girl Noodles is sick she had a seizure & they don’t know why I’m taking her to see a specialist 2 hours away for a brain scan,” she tweeted on Tuesday. “I can’t even look at my baby girl without crying she just looks so sick and helpless.”

Yesterday, the E! Fashion Police co-host broke the bad news. “Noodles is not going to make it. She was born with a brain defect and I have to put her to sleep today. I’m devastated. I just can’t believe it.” She followed up the message with a quote: “‘If there are no dogs in Heaven, then when I die I want to go where they went.’ -Will Rogers”

One of Osbourne’s followers then questioned her about putting her dog to sleep, saying, “Is it done?!!! Did u do it?!! I don’t understand why they need 2 b put down why don’t they let them die in peace?!! It’s sad.”

Osbourne quickly quipped back: “Because she was not in peace her brain was swelling in her head. I DON’T PLAY GOD! It was an unfortunate necessary!”

The death of Noodles comes just weeks after her older Pomeranian, Sid, almost died after eating a packet of chewing gum.