Prince Harry is heading to war! The third in line to the throne may be heading back to Afghanistan. 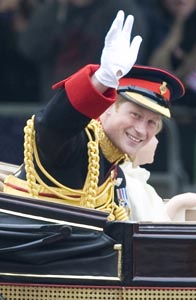 Prince Harry is more than Kate Middleton‘s royally hot brother-in-law. He will soon be an official Apache helicopter pilot — and could very well be sent to serve with the British Army in Afghanistan.

“His course finishes in 2012 and after that his deployment will be a matter for the army chain of command,” said a spokesman for the Ministry of Defense.

That could mean Prince Harry will return to Afghanistan, a Taliban stronghold.

“It has always been the prince’s intention to serve operationally wherever the MoD request of him,” said a Clarence House spokesman.

Harry earned his wings earlier this year and is now undergoing an eight-month “conversion to role” course on how to use Apache weapons in battle. Only the top one in 50 pilots is ever cleared to fly the $56 million choppers.

The prince served in Afghanistan three years ago, but was pulled out for security reasons when word leaked he was in the war-torn region. Ever since he has expressed a desire to return — if only to give the Army their money’s worth for his million-dollar training.

During his visit to the South Pole earlier this year, Prince Harry said of his goal to return to Afghanistan, “I severely hope so, and from the military’s point of view I seriously hope so. You know money’s been spent towards your training — God knows how much money’s been spent on us.”

“So from their point of view if I’m not going then I’m taking up someone else’s space.”

The redheaded prince is 26 years old.

read on for more prince harry