Carla Gugino has had an incredible year and it’s only June. Currently starring opposite Jim Carrey in Mr. Popper’s Penguins, Gugino has banked three other films in the last several months: Electra Luxx, Every Day and Sucker Punch. This is one in-demand actress. 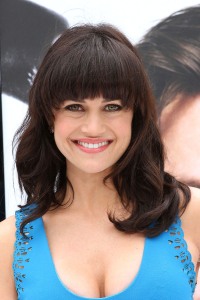 In Mr. Popper’s Penguins, Carla Gugino portrays the ex-wife of Jim Carrey — who may or may not be rekindling their romance. Her character Amanda is the primary guardian of the couple’s two kids and provides a perfect yin to Carrey’s yang.

As manic and hilarious as Carrey’s Mr. Popper is, Gugino is the calm presence to keep the kids grounded while their father focuses on being one of New York City’s most successful real estate developers.

With any other actress, the role of ex-wife to Carrey could have been completely lost. But with Gugino as Amanda, the character has a deep heart and thus provides Carrey the platform for becoming the best man and father he can be.

Gugino sat down with SheKnows for a video interview at the Beverly Hills Hotel recently and dished her stellar year, why she chose Mr. Popper’s Penguins as her next project and how the film is finally a summer movie that the entire family can enjoy.

Mr. Popper’s Penguins is based on the 1930s children’s novel and follows the exploits of a man who is on the verge of following in his own absentee dad’s footsteps. When a group of penguins are delivered to his apartment from his recently deceased father, what begins as a nuisance provides the key to winning back his children and wife’s hearts.