Move over Green Lantern, the original green creature is heading to the big screen. Kermit the Frog and his friends Miss Piggy, Jason Segel and Amy Adams are all front and center in the latest trailer for The Muppets. It’s called Being Green and falls in line with their previous parodies Green with Envy (romantic comedies) and The Fuzzy Pack (Hangover: Part 2).

The Muppets‘ latest trailer, entitled Being Green, blatantly pokes fun at the superhero movie Green Lantern. It even opens up with a Ryan Reynolds narration that shifts from his deep smoldering voice to the quirky high-pitched tone of Kermit the Frog. 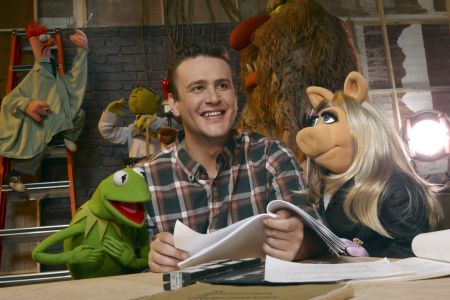 Being Green is the first trailer to introduce Chris Cooper as the film’s main villain. It looks like he’s in cahoots with Statler and Waldorf, two old men known for sitting in a balcony and spewing rude comments. Their sarcasm knows no bounds.

At one point in the trailer, The Muppets go completely Meta when they break the fourth wall and acknowledge that they’re making another parody. Jason Segel says it best, “Why don’t we just show a real trailer? I mean what are we hiding? Did we make the movie in Swedish or something?”

No, they didn’t make it in Swedish, they just like making us laugh! The Muppets opens in theaters this Thanksgiving on November 23. And they promise it will be in English!

The Muppets: Being Green trailer