The fruitful Duggar family has welcomed another member! Josh and Anna Duggar are now the parents of two, after welcoming a son Wednesday. 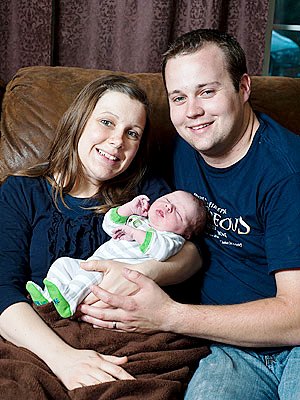 The Duggars have grown in number yet again! The family featured on TLC’s 19 Kids and Counting now includes Michelle and Jim Bob Duggar’s own 19 children along with two grandbabies.

Josh Duggar, the eldest of Michelle and Jim Bob’s children, has welcomed a son with wife Anna. Baby boy Duggar was born Wednesday at the family home in Arkansas, weighing in at 8 pounds, 5 ounces!

This is the second child for Josh and Anna Duggar, who are already parents to 20-month-old daughter MacKynzie.

Rather than follow the ‘J’ naming tradition established by Michelle and Jim Bob (all 19 of their kids have names that start with the initial), the young parents chose an initial to honor Josh’s mother: ‘M.’ While the name of the Duggars’ baby boy has yet to be released, People reports the family will stick with the ‘M’ theme.

Josh and Anna Duggar have said previously that they plan to follow his family’s tradition of allowing God to decide how many children they will have. “I don’t think you can say we’re going to set out and say we’re going to have five kids or four or three,” 23-year-old Josh said in March. “We have no control over that. God has the control. Obviously, we can do things to prevent that, but I’m glad my parents didn’t just settle to have three or four children. There are definitely a lot of advantages to trusting [in God]. Anna’s glad that her parents didn’t stop at four, because she was number five.”

Have an ‘M’ name suggestion for baby boy Duggar? We’d love to hear it!

Congratulations to the Duggars!