Jennifer Lopez has told reporters she is “on the fence” about returning as a judge on American Idol next year. Has JLo spread herself too thin with other projects — or is she holding out for more money? 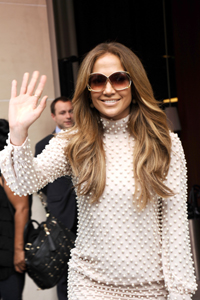 Jennifer Lopez is one busy woman! The mother of two has been busy as a judge for American Idol, while promoting and performing her hit song On the Floor.

In addition, she has a line of 17 perfumes for men and women, as well as a new line of clothes with husband Marc Anthony and Tommy Hilfiger that will be featured at Kohl’s.

She and Anthony are also currently scouting talent in Latin America for their new Spanish reality TV show, Q’Viva! The Chosen. Let’s not forget she is also in the middle of blocking a sex tape from being released!

In fact, Lopez admitted to the BBC that she had a lot of projects up in the air. “I loved [Idol] but I have a lot of other things happening, and it’s going to come down to me making a choice of what I want to do for the next year… We’re not really at the breaking point of ‘You have to make a decision right now!'”

Or is Lopez holding out for more money? She reportedly made $12 million last year — so maybe this is a power play for more money? After all, Simon Cowell raked in $35 million per year for his stint as a judge on American Idol.