Tobey Maguire takes off his Spider-Man tights and puts on Prada menswear as the new face of the line.

Spider-Man actor Tobey Maguire is the face of Prada for their fall/winter 2011 line. Maguire poses in dark three-button jackets, v-neck tops, mock turtlenecks and sweaters in these shots taken by David Sims in New York. 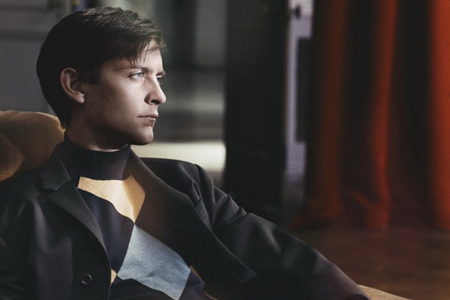 “A great supporter of the Arts, Miuccia Prada has inspired a culture of creativity that is woven through every aspect of her company, from her collections, her campaigns, to every design in her stores,” Maguire said in a statement to Vogue. “I have such admiration for her artistry and I’m thrilled to be a part of Prada’s fall campaign.”

Fashion runs in the family as Maguire’s wife, Jennifer Meyer, has her own successful line of jewelry, including the popular leaf-shaped 18-carat gold charm famously worn by Jennifer Aniston in The Break-Up. Meyer also worked for Giorgio Armani and Ralph Lauren — so we are sure she approves of her husband’s new gig.

Prada describes the fall/winter 2011 line as “an intimate character study” while saying Maguire’s “mood is transfixed and pensive, full of vibrant intensity and mystery.”

Maguire will next appear in Baz Luhrman’s The Great Gatsby.

Tell us: What do you think of Maguire as the new face of Prada?