Real life is often stranger, funnier and more entertaining than fiction, which is why Fran Drescher and her gay ex-hubby Peter Marc Jacobson decided to go with their own experience — again! As with the pair’s first hit The Nanny, Happily Divorced isn’t directly about their life, but Jacobson’s monumental reveal certainly inspired the new TV Land sitcom, which stars Drescher, John Michael Higgins, Tichina Arnold, Rita Moreno, Robert Walden and Valente Rodriguez.

“It’s about a woman who has been married 18 years when her husband decides to come out,” Fran Drescher previewed. “They love each other and they’re Happily Divorced.” 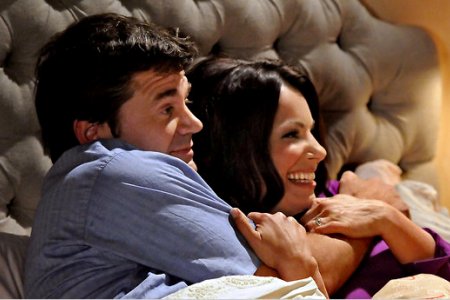 Drescher was hit by a similar reveal after divorcing her high school sweetheart and The Nanny co-writer, Peter Marc Jacobson. As with The Nanny, which pulled on their shared experiences as kids from Queens, New York, Happily Divorced turns their shared history into comedy fodder.

Happily Divorced is not, however, the story of the original Fran and Peter. The characters of the same names in a similar situation were instead inspired by Drescher and Jacobson’s tale.

In the new TV Land comedy, Drescher plays Fran, a florist who is floored when her realtor husband (John Michael Higgins) reveals he’s gay. Money’s tight these days, so Peter moves down the hall, they both hit their respective dating scenes and the laughs ensue.

In tonight’s premiere, Fran worries about her relationship with Elliott (DW Moffett) after he learns she’s living with her ex-husband, who is also her best buddy. Fran’s plans for a romantic evening turn into an awkward morning thanks to Peter’s drunken behavior.

“The relationship is very complex and profound, as it is in real life with Fran and Peter,” John Michael Higgins (Peter) previews. “Even though I’m not playing Peter, we’re already developing an interesting, complicated relationship.”

Higgins adds that he and Drescher had chemistry from “day one, within 30 seconds of meeting each other,” and Drescher seems to agree.

“The Nanny was such a tough act to follow,” Drescher reveals. “I’m thinking, ‘Who am I going to find that I’m going to have the chemistry with like I had with Charles Shaughnessy, who played Mr. Sheffield?’ But we absolutely found that person in John Michael Higgins. Our chemistry is just amazing. He is so funny and brilliant.”

Happily Divorced premieres tonight on TV Land, after a new episode of Hot in Cleveland. The laughs start at 10/9 C.