A man already in prison has confessed to robbing and shooting Tupac Shakur — an incident that ultimately led to the deaths of both the rapper and Biggie Smalls. 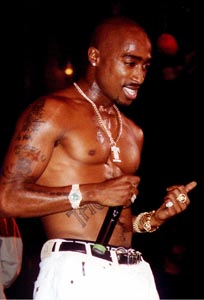 Who killed Tupac Shakur? We still don’t know the answer to that, but we may be getting closer to uncovering the mystery of his death (and, yes, he is dead, contrary to the Tupac Shakur is alive in New Zealand rumor).

Dexter Isaac, in prison for murder and robbery among a host of other offenses, has confessed to shooting Shakur during a 1994 robbery at Quad Studios — and he says he still has the loot to prove it.

In a statement to AllHipHop.com, Isaac says he was paid $2,500 to carry out the robbery and was allowed to keep all the jewelry he stole except for one ring. Who kept that? The man Isaac says put him up to the crime: James Rosemond.

Rosemond, who goes by the professional handle Jimmy Henchman, manages Brandy, Sean Kingston and Akon, and is currently on the run from the feds on drug charges. Isaac, who is currently serving a life sentence for unrelated crimes, says he’s ticked that Rosemond fingered him as a government witness when he has never ratted out anyone — until now.

How does this all connect to the deaths of Tupac Shakur and Notorious B.I.G.? Rosemond and Isaac were both friends and associates of Biggie and Sean Diddy Combs, both of whom have long been suspected of having a hand in Tupac’s murder. In Isaac’s statement to AllHipHop.com, he drops some pretty obvious hints that Rosemond, along with Diddy, had something to do with it, including how the two want to come off “all innocent-like” and he asks if Rosemond will “flip on Puffy when the feds get to you.”

Tupac Shakur would have been 40 years old tomorrow.