Pippa Middleton has called off her relationship with boyfriend Alex Loudon. Who should she snog next? 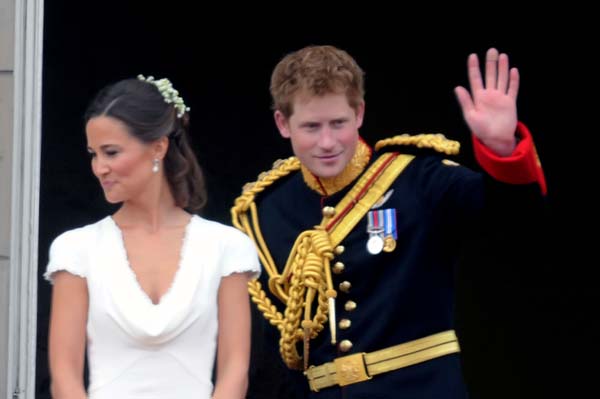 The owner of the world’s most famous rear is back on the market! Pippa Middleton has broken up with her financier boyfriend, Alex Loudon.

“It is common knowledge in their close circle of friends that Pippa and Alex have recently split up,” a friend told the Times of London.

Middleton, 27, and Loudon, 30, seemed like a good fit — until the royal wedding.

Plus, she’s moving to the south of France, according to insiders.

“She is keen to spend some time living abroad — she’s a massive fan of the south of France and hopes to work there and have a base there a bit more permanently,” a source told The Sun.

Interesting. The younger female Middleton has her pick of any man in the world these days. We’ve never been shy about suggesting which bachelor hottie she should date next.

However, there’s one name we keep coming back to: Prince Harry. Sure, Harry recently said that he’s a long way off from getting married, but that doesn’t mean he can’t date all of the eligible ladies in the land.

Why do we want to see Pippa and Harry together? Let us count the ways.

Don’t agree? Check out our other picks for Pippa!>>>

The younger Middleton and Prince both like to go out — and they’re both known for planning blow-out bashes: Harry planned Wills’ bachelor party in April and Pippa ruffled more than a few feathers when she turned one of Buckingham Palace’s rooms into a nightclub for the royal wedding reception.

Plus, Middleton is a party planner with both her parent’s company and for another business, TableTalk.

They look cute together

Twitter exploded with comments over Pippa rear end during the royal wedding on April 29, but it was the cheeky rapport that the pair displayed that had people raising their eyebrows. Of course, Harry brought his on-again, off-again gal pal, Chelsy Davy, to the wedding — but that doesn’t mean there wasn’t some covert flirting going on.

“Odds Kate sat down Pippa and Harry separately and ordered them not to hook up tonight: 5-1. Odds they will anyway: even money,” the Fug Girls wrote during the royal wedding.

We have to agree.

They understand the lifestyle

It’s got to be a confusing — and sometimes lonely — world when you’re the younger siblings of royalty. Pippa and Harry both understand that role well and they can confide in one another on romantic dates. Sure, opposites attract — but these two could find strength in their similarities.

Do you think Prince Harry is a good match for Pippa Middleton?