In a new interview, Tatum O’Neal dishes on her relationship with her father, Ryan O’Neal. Now she’s worried he’s going to beat her up. 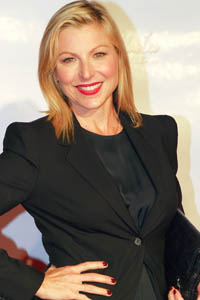 Tatum O’Neal describes her famous father Ryan O’Neal as a frightening mess in a recent interview. Promoting their upcoming reality TV show, Ryan and Tatum: The O’Neals, Tatum depicts her father as a man out of control whom she fears, and she has no plans of watching the TV version of their relationship beyond the first episode.

“My dad is kind of ego-driven,” Tatum says of how the idea for the show came about. Ryan was eager to get back on TV, she tells Howard Stern, and when Stern asks if Ryan was “desperate to be on TV,” Tatum agrees.

As for Ryan’s weepy appearance on The Oprah Winfrey Show after the death of Farrah Fawcett, with whom Ryan had a son, Tatum declines to comment on whether or not she thought Ryan’s tears were crocodile tears.

“Because he might beat me up or something,” she says, and it doesn’t sound like she’s joking.

O’Neal, 47, is promoting her second book, Found: A Daughter’s Journey Home, a warts-and-all account of her troubles with drugs, love and her kids.

“He’s only comfortable, I would say, with women who are much younger and so in some way I must threaten him,” she says of her complicated relationship with her father. “My dad’s chosen to be in a certain time zone and not evolve past it.”