After a rough year in both her personal and professional life, Christina Aguilera is opening up to W magazine. The nearly nude cover feature promises a ‘bare all’ interview with The Voice judge. 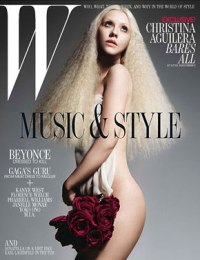 Christina Aguilera’s nude W magazine cover depicts a long, frizzy-haired songstress covering up her front half with only a small piece of white silk and a bouquet of thoughtfully placed red roses. As for her back half? It’s baring all, just as Christina Aguilera does when talking about her struggles and failures inside the pages.

“At one time or another, we were both not angels. It got to a point where our life at home was reminding me of my own childhood. I will not have my son grow up in a tension-­filled home. I knew there would be a negative reaction in the press to my divorce, but I am not ­going to live my life because of something someone might say. That goes against everything I sing on my records. I have to be myself.”

On life as a young girl:

“I felt caged by my childhood. And unsafe: Bad things happened in my home; there was violence. The Sound of Music looked like a form of release. I would open my bedroom window to sing out like Maria. In my own way, I’d be in those hills.”

“I was sad, but I’m still glad that I did the movie. During production, I was going through a lot of self-discovery. As a quote-unquote pop star, you have your entourage with you at all times. When you enter and leave a place, backstage, even at home — you always have your team. On the movie set, I didn’t have anyone around me. And it felt good. When I first met my husband, I needed that ­helping hand to take the reins and look after me. After the movie, I grew out of being that little girl: I became more of an adult.”

Are you a fan of Christina Aguilera’s W magazine cover?