Elizabeth Hurley has finalized her divorce after splitting from her husband Arun Nayar last December. 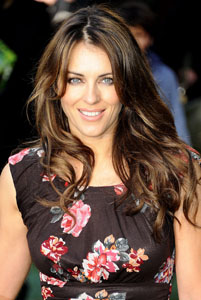 Elizabeth Hurley is officially single and ready to mingle, even though it sounds like she’s been doing that since long before it became official. The actress’ divorce from her husband of four years, Arun Nayar, has been granted a decree nisi by a British judge.

The judge agreed with the couple’s assertion that the marriage had “broken down irretrievably” — perhaps partially to do with photos that emerged of Hurley making out with married Australian cricket player Shane Warne — and said Elizabeth Hurley’s divorce would be wrapped up within six weeks.

When the scandalous photos came out, both Hurley and Warne defended their actions online, stating both couples had been separated for months.

“Not a great day. For the record, my husband Arun & I separated a few months ago. Our close family & friends were aware of this,” Hurley wrote on Twitter.

Warne posted on his blog, “Sadly and unfortunately, Simone and I split up a while ago, our close friends and family were informed at that time. It is a private matter so we did not make it public. We remain friends and will continue to be good parents.”

Warne is a known and notorious womanizer who was demoted from the vice-captaincy of his cricket team because of the negative publicity brought on by his many affairs. Nayar was also married when he and Hurley began their romance.

Hurley’s marriage issues may not be over, however. Turns out she and Nayar did not have a prenup, and her fortune is said to vastly outweigh his — so Hurley may be writing a pretty hefty check to the Indian businessman.

read on for more elizabeth hurley