Gary Busey has been fired from what was to be his latest film because of his increasingly bizarre and inappropriate behavior. 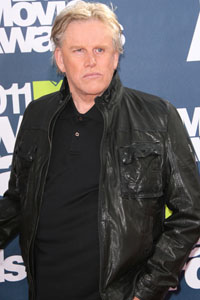 Gary Busey is a unique guy — that’s no secret — but the cast and crew of the movie Mansion of Blood say he went over the line.

The former Celebrity Apprentice competitor had been exhibiting increasingly bizarre behavior on the set of the flick, but the last straw was Busey making highly inappropriate comments to a female costar.

Despite the fact that half the movie was already filmed, bosses had enough: Busey was fired. Producers spent the money to rewrite the script and reshoot with a new actor.

“The situation was plagued by contractual issues and misunderstandings from the outset,” Busey’s rep confirmed. “Gary considers this episode concluded and has no further comment on the matter.”

Why is this guy a total nut job who alienates everyone whose path he crosses? Remember, on Celebrity Apprentice Meatloaf almost literally ripped his head off for sabotaging his project. The answer: Brain damage. The actor suffered actual brain damage after a severe motorcycle accident in 1988, a condition that was addressed during his stint on Celebrity Rehab with Dr. Drew.