America’s Got Talent trudged on this week and our stand-out video of Tuesday night’s show came from Marylee, who performed a special tribute to judge Piers Morgan that didn’t get her a ticket to Vegas but did get her a one-way ticket to his heart.

As America’s Got Talent continued on with its audition process this week, there was a stellar video/song tribute to Piers Morgan we couldn’t help but mention. 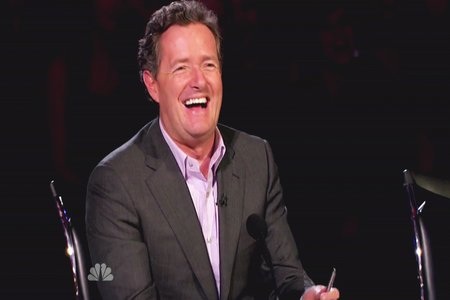 Marylee came to America’s Got Talent with a song in her heart and a dream in her eyes. She took the stage and told Sharon Osbourne, Howie Mandel and Piers Morgan about her special talent — she writes songs for dead people. We’re not lying. She said it herself. Then she explained she writes lyrics that jive with people’s lives who are dying. When you put it on paper it sounds interesting but when she said it, well, it was weird.

She also claimed to be singing silently for years and only recently began singing out loud. Yes, the judges asked her what we were all thinking — how do you sing silently?

Anyway, her talent for Tuesday night’s audition was a sweet song to Piers Morgan as a video of the judge played in the background. He’s not dying or dead, but we’ll go with it. Of course, her melody was sweet and the song called out his fantastic attributes of “walking the walk.”

Piers Morgan totally wanted to put her on a plane to Vegas but he was vetoed. Check out Marylee’s audition below and tell us what you think!