The Real Housewives of New Jersey have found themselves in a heap of trouble after they were slapped with a lawsuit for a barroom brawl in the Dominican Republic. 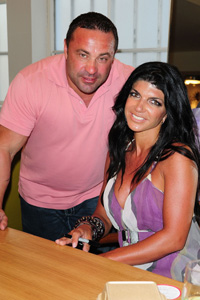 What started as a bar brawl in the Dominican Republic has ended in a lawsuit for the cast of The Real Housewives of New Jersey, as well as Bravo and the production company. “The cast got into a fight with a whole bar,” an insider said.

Teresa Giudice opened up a bottle of champagne — and accidently sprayed it on some guests at the Hard Rock Moon Lounge. Joe Giudice, as well as Caroline Manzo’s two sons, quickly got into it with an upset guest who got sprayed on.

“One guy started yelling at her,” a witness said. “Then Joe and the Manzo boys told him to back off. That’s when they all started wailing on each other.”

The lawsuit alleges that the champagne “caused severe eye irritation” to one patron and Teresa did not apologize, but “laughed at, mocked, humiliated, insulted and physically approached” them.

“They stomped on them. Kicked them. It was all brute force,” says the attorney for Adolfo Arreola and Jason Gomez. “And there were no criminal repercussions because the D.R. police arrested no one. That’s what’s upsetting.”

The lawsuit “is seeking unspecified damages for the plaintiff’s physical injuries,” says People.