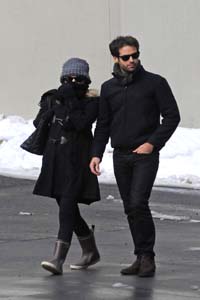 Finally! Natalie Portman is now the happy mom of a baby boy, after a seemingly 28-month pregnancy. Portman and her fiance, Benjamin Millepied, recently welcomed their new bundle of joy, according to People.

Phone calls to Portman’s reps were not immediately returned.

Portman, 30, met Millepied in 2010 on the set of her Oscar-winning film, Black Swan. Millepied was Portman’s choreographer on the film — and they later struck up a romance. The couple announced their engagement — and Portman’s pregnancy — in December 2010.

“I have always kept my private life private but I will say that I am indescribably happy and feel very grateful to have this experience,” Portman said at the time.

Their relationship gets the seal of approval from Black Swan director Darren Aronofsky.

“I asked (Portman and Millepied) the other day if I get credit for that. They said, ‘You get credit.’ He is amazing. He is a serious guy who is doing very serious things with his life. I think it is a very good match,” he said.

However, Millepied has earned a bit of a reputation as a divo recently. He had some reporters kicked out of an awards ceremony for asking about Portman’s health.

“We were told by the organizers that our inquiring after Ms. Portman’s health was ‘inappropriate’ and that Mr. Millepied wanted us out,” New York Times reporter Sarah Maslin Nir wrote.

Regardless, they’re now the happy parents to a bouncing baby boy. We can’t wait to find out his name!

What do you think Natalie Portman and Benjamin Millepied should name their new son?

Read on for more Natalie Portman